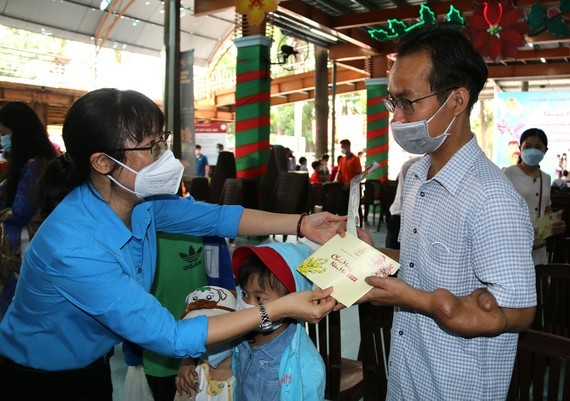 From mid-November, employees working at Saigon Food Company at Vinh Loc Industrial Park in Ho Chi Minh City’s Binh Chanh District were delighted when they were informed of the Tet bonus worth two months of their usual salary.

Ms. Tran Thanh Nga, a worker at the company said: “Workers in other firms have reduced working hours, lost jobs due to reduced orders or bankrupted companies, I and my husband went to work but we were anxious because the monthly salary is just enough to cover living, lodging and taking care of our children's education; hence, my family looks forward to the Tet bonus to have money to take the children home for Tet celebration with grandparents at the end of the year. But I found that many companies have fallen into difficulties this year, so I got worried; therefore, when the company announced the Tet bonus plan, I and my husband feel happy".

According to the union president of Saigon Food Company Pham Thi Hong Ha, from mid-November, the company informed its employees about its plan for the 2023 Lunar New Year bonus.

Accordingly, the company spends nearly VND40 billion on Tet bonuses for its employees. Each worker will be rewarded with two months' salary, an average of VND16 million per person. Particularly, highly skilled workers who were given certificates of merit for their achievements will be rewarded with nearly 2.5 months' salary, equivalent to nearly VND30 million. In addition, the company also pays for annual leave days that employees have not taken leave yet, seniority bonuses for employees, and organizes passenger buses to take workers back to their hometowns to unite with their relatives on the special national holidays.

In the past few days, employees of the Printing Joint Stock Company No. 7 in Tan Tao Industrial Park in HCMC’s Binh Tan District were also extremely elated at the news that the company will give s Tet bonus which is expected equivalent to three months of their salary; moreover, workers will be able to ask for two months of bonus in advance on New Year's holidays.

According to Mr. Truong Hoang Tam, President of the Trade Union of Printing Joint Stock Company No. 7, this is the company's way of gratitude to employees who have been working for the company during difficult times. The company's early announcement of the Tet bonus as well as an early payment of bonuses aims to make workers feel happy in the last days of the year.

Although orders in the last months of the year have decreased by 20 percent-30 percent, the Nissei Electric Vietnam Company in Linh Trung 1 Exporting Processing Zone in Thu Duc City still keeps a bonus worth 1.8-2.2 months of their basic salary for each employee; thus, an employee is rewarded with more than VND13 million.

Ms. Tran Thi Hong Van, Union President of Nissei Electric Vietnam Company, said that besides Tet bonuses, the company's union also coordinated to take care of difficult workers during Tet. Accordingly, each trade union member is entitled to receive Tet gifts. Particularly for 10 employees who have initiatives to benefit businesses from VND 50 million or more, they will be given plane tickets to their hometown to celebrate Tet.

As for Always Company in Tan Thuan EPZ in HCMC’s District 7, although it has not received orders in recent months, the company still pays employees Tet bonuses equal to 0.8-2 months of laborers’ salary a person. Furthermore, workers who have worked for 10 years or more, without violating the regulation will be rewarded with 2 months' salary.

In fact, except for businesses that are facing difficulties in order to have to reduce working hours or suspend production, it is expected that the Tet bonus in many enterprises in Ho Chi Minh City for employees is one month's basic salary or more.

Mr. Tran Phuoc Hung, Vice Chairman of Thu Duc City Confederation of Labor, said that many firms have been facing difficulties due to a lack of orders, but most businesses in the area said they would try to offer Tet reward equivalent to a month's salary.

Vice Chairman of the Ho Chi Minh City Confederation of Labor Pham Chi Tam shared that in the last months of 2022, due to the impact of inflation in many countries, some partners have canceled contracts and reduced orders, leading to many domestic enterprises not having new orders or reduced orders especially firms in the fields of wood processing, footwear, and textile industries. Consequently, many businesses have had to reduce working hours while others have had to gradually reduce their workforce and cut salaries, or even allow their employees to take a break from work, suspend labor contracts, or even terminate labor contracts.

By the end of November 2022, in Ho Chi Minh City, 155 businesses with more than 50,100 employees were affected, causing workers' incomes to decrease. It is this forecast that many businesses will not have enough funds to give employees rewards worth the 13th month's salary.