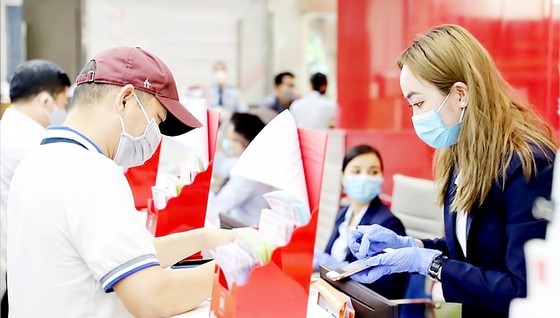 In the first six months of this year, the VN-Index sometimes jumped by nearly 28 percent compared to the beginning of the year - the second-strongest increase in the world.

Data from the Vietnam Securities Depository (VSD) shows that domestic investors opened nearly 621,000 new securities accounts in the first six months of this year, much higher than the total number of new accounts opened in 2020 and 2019. Market liquidity continuously set new records with the trading value of up to VND23 trillion - VND25 trillion (more than $1 billion) in many trading sessions, even up to nearly VND30 trillion.

According to experts, factors, including low deposit interest rates, tightened corporate bond channel, and stagnant gold investment channel, are the main reasons for the recent massive opening of securities accounts by domestic investors.

According to the General Department of Taxation, recently, tax revenue in the securities sector has increased sharply.

Recently, securities companies have increased their capital to meet the needs of investors in the context of a booming market, thereby making the race for margin balance and market share fierce.

Lately, SSI Securities Company has successfully signed a loan contract with a limit of up to $100 million of unsecured capital from a group of leading banks in Taiwan, with a term of no more than 12 months at short-term interest rates according to the international monetary market. In the context that margin loans of securities companies are increasing to a record high, the news is a new driving force for the market.

According to the State Securities Commission (SSC), from the end of the first quarter of 2020 to now, the margin loan balance has increased nearly three times, approximately VND110 trillion. Mr. Pham Hong Son, Vice Chairman of the SSC, said that in the first six months of this year, the total capital mobilization on the stock market was estimated at nearly VND176.75 trillion, up 65 percent year-on-year. Along with the strong growth of the index, the stock market capitalization also rose sharply. By June 30, the stock market capitalization exceeded VND6.83 quadrillion, up 29.2 percent compared to the end of 2020, equivalent to 108.7 percent of GDP.

This Covid-19 outbreak with unpredictable developments has negatively affected Vietnam's stock market in July. The VN-Index fell by 1.9 percent last week due to heavy selling pressure as investors panicked.

Accordingly, Vietnam's stock market recorded a third consecutive losing week and slumped by about 12 percent compared to the beginning of July. Not only did the index drop sharply, but the market liquidity also plunged sharply from the average level of VND22 trillion - VND23 trillion in June to below VND20 trillion per trading session. Especially, in the trading session on July 16, the market liquidity was only VND18.8 trillion. However, the large cash flow will possibly be ready to return to the market when the pandemic eases; the progress of Covid-19 vaccination is optimistic; the VN-Index returns to an attractive level at below 1,200 points.

Statistics from securities companies also show that by the end of the second quarter of this year, the deposit balance of customers at securities companies is about VND86 trillion, an increase of VND21 trillion compared to the previous quarter, highest level in history. It is the amount of money available in the accounts of investors and has not been disbursed yet.

According to analysts, the driving force for the stock market to be more positive in the coming time is that the monetary policy will continue to be loosened, and banks will reduce interest rates to support businesses, thereby creating a favorable environment for the stock market. Besides, the stock prices have dived quite steeply and have become more attractive.

Therefore, the stock market remains positive in the medium and long term. However, in the third quarter of this year, there will be many uncertain variables. GDP growth in the third quarter and profits of businesses will likely decline sharply, increasing the cautiousness in this period. The market may experience many trading sessions with a sharp decrease if negative information is released.