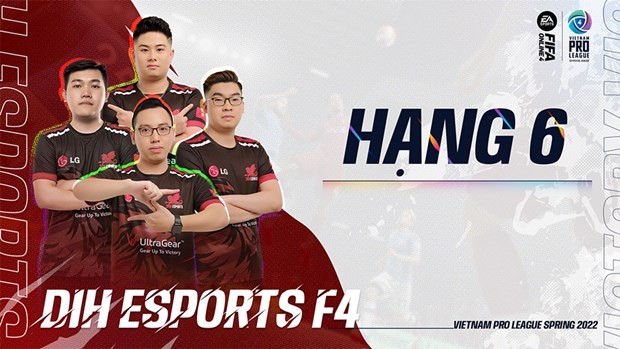 DIH Esport F4 will represent Vietnam at the regional event after beating various top dogs at the knockout round to earn a ticket to the SEA Games 31 and a prize worth 80 million VND (about US$3,500).
Four-member DIH Esport F4 is considered the strongest team of Vietnam at the moment. It comprises captain Maestro – Nguyen Hoang Hiep, who contributed to helping Vietnam come second at the EA Champions Cup Winter 2018, along with Nguyen Le “Cold” Thanh Tong, Le “Lee Harii” Huy Hai, and Tran “Mesut” Minh Quang.

The team will face Faze Clan of Thailand, the Asian champion, at this year’s SEA Games.

Thailand’s team at SEA Games 31 comprises three of Faze Clan and one of MSC Chonburi.

FIFA Online 4 will begin on May 13 at the National Convention Centre in Hanoi, seeing the participation of six teams. They will play in a round robin format to decide the top two teams qualifying for the final round, set to take place on the following day.

As the host, Vietnam was in the top pot of a draw to decide fixtures at the group stage of FIFA Online 4, together with Thailand.

Vietnam is in Group A along with Malaysia and the Philippines, and Group B includes Thailand, Indonesia and Singapore.

SEA Games 31 will offer chances for DIH to affirm its position in the region and bring glory to the nation.

Thailand, Malaysia and Singapore are considered as the most formidable rivals of Vietnam this time.

The Philippines added e-sports to the list of competitions when it hosted the 30th SEA Games in 2019 and Vietnam won three bronze medals at the event.

The event, themed “For a Stronger South East Asia”, will be held in the capital and 11 neighbouring provinces and cities from May 12 to 23.

Featuring 40 sports with 526 events, it is expected to attract around 10,000 participants. The biennial event was initially slated for late 2021 but delayed due to the Covid-19 pandemic.