Previously, Vietnamese fans were surprised by the sold-out notice from the organizing board.

After exchanging the above information with General Secretary of VFF Le Hoai Anh, his counterpart confirmed to sell out tickets to Vietnamese fans. 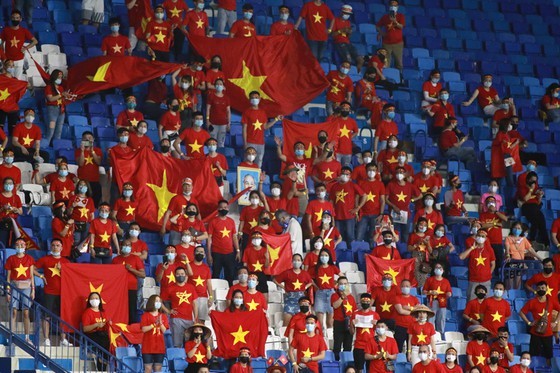 Vietnamese football fans on stadium in the match between Vietnam and Malaysia
In the two matches against Indonesia and Malaysia, the Vietnam National Football Team successfully defeated the two football teams with scores of 4-0 and 2-1, respectively under the cheering of Vietnamese football lovers living, working and studying in UAE as well as those in Vietnam.
Earlier, Asian Football Confederation (AFC) decided to allow 30 percent of the number of spectators in the stadium and the accurate number will be based on the stadium conditions.

The number of tickets will be shared equally for matches without the participation of the host country team UAE. In case of the matches between UAE and guest national teams, the guest football fans will be owned a maximum of 10 percent tickets in total.

Football fans have to show certificates of full Covid-19 vaccination to enter into the stadium as regulated.