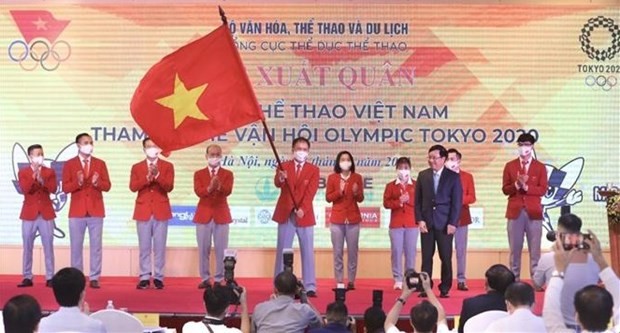 A member of the Vietnamese sports delegation holds the national flag handed over by Deputy Prime Minister Pham Binh Minh (front, right) at the send-off ceremony on July 13 (Photo: VNA)

All the members have been injected with the required two doses of Covid-19 vaccine, and they will be tested twice within 72 hours prior to the departure.

Head of the delegation Phan said the athletes will strive to achieve the best possible results, adding that the Olympics is also an occasion to evaluate the recent development of the Vietnamese sports and to identify the targets and focal tasks for the time ahead. 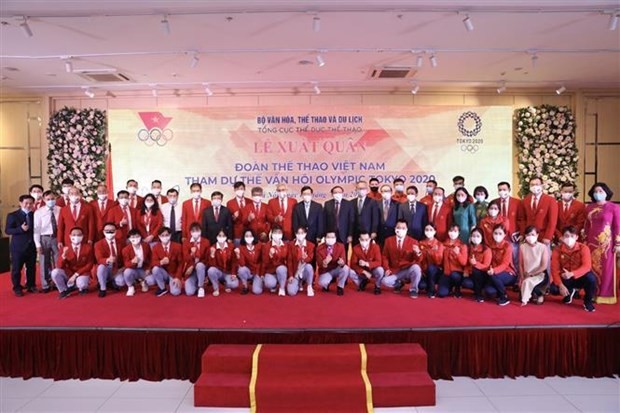 Officials and the sports delegation pose for a photo at the send-off ceremony on July 13 (Photo: VNA)

He pledged that the delegation will sustain solidarity and discipline to turn every challenge into momentum to show the best performance and obtain glory for the Fatherland.

They will also comply with the organisers’ anti-pandemic rules and help strengthen Vietnam’s solidarity, friendship, and cooperation with international friends, the official added.

He expressed his hope that the athletes will show their strongest determination in competitions. Each member should also truly be a goodwill ambassador to help introduce Vietnam’s culture and hospitality via the Olympics.

With their serious and thorough preparations, resolve and efforts, the delegation will attain the best possible results at the games, the Deputy PM added.

At the Rio 2016 Olympics in Brazil, Vietnam bagged one gold and one silver for the first time in an Olympics thanks to marksman Hoang Xuan Vinh.