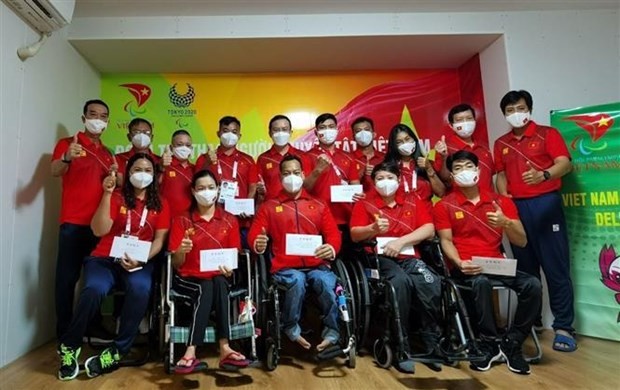 Members of the Vietnamese delegation at the Tokyo 2020 Paralympic Games pose for a group photo at the Paralympic Village (Photo: VNA)
Talking to the Vietnam News Agency’s correspondent prior to the opening ceremony, Deputy Director of the Vietnam Sports Administration Nguyen Hong Minh said seven Vietnamese athletes will compete in three sports of swimming, weightlifting and athletics.
Minh, who is also head of the Vietnamese delegation to the Tokyo 2020 Paralympics, added that they are in top form and determined to earn the best results at the global sporting event for athletes with disabilities.
Swimmer Trinh Thi Bich Nhu will be the first Vietnamese athlete to compete at the Games. She is to take part in the women’s 50m freestyle S6 on August 25 morning (Japan time).
Nearly one hour later, swimmer Vo Thanh Tung will start his journey in the men’s 200m freestyle S5.
Nhu is also slated to compete in the women’s 200m individual medley on August 26, 100m breaststroke on August 28 and 50m butterfly two days later.
Tung will join the men’s 100m freestyle on August 26, 50m butterfly the next day, 50m backstroke on August 30 and 50m freestyle on September 1.
Another Vietnamese swimmer Do Thanh Hai will compete in the men’s 100m breaststroke SB5 on August 28.
In weightlifting, defending champion Le Van Cong and his female colleague Chau Hoang Tuyet Loan will show their strength at the men’s 49kg on August 26 and women’s 55kg one day later.
Athlete Nguyen Thi Hai will compete in the women’s discus throw F57 on August 28 and shot put F57 on September 2.
Her husband Cao Ngoc Hung will represent Vietnam in the men’s javelin throw F57 on August 28.
Five years ago, Vietnamese athletes with disabilities made their mark at the Rio 2016 Paralympics when they won one gold, one silver and two bronze medals.
The Tokyo Paralympics is to be held from August 24 to September 5 with the participation of 4,400 athletes from 160 countries and territories around the world.