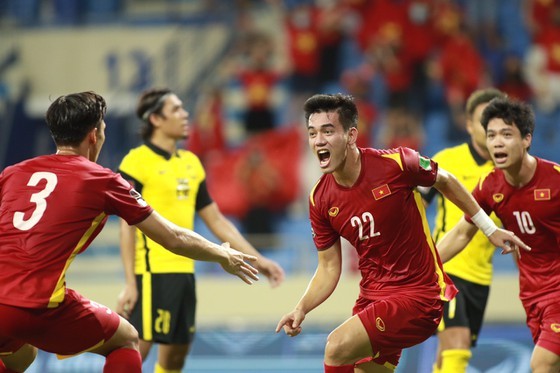 Nguyen Tien Linh celebrates his opening goal. (Photo: SGGP)
The three points mean Vietnam need only a draw with the UAE on June 15 to advance.
With star midfielder Nguyen Quang Hai suspended, Vietnam’s performance at the Al Maktoum Stadium in the UAE was far less accomplished than in the 4-0 win over Indonesia, but coach Park proved once again he can set his team up to grind out a result.
Malaysia started the match faster and enjoyed the majority of possession but were unable to create any clear chances early on.
In contrast, Vietnam were more effective on their surges into the Malaysian half and enjoyed a lot of joy down the left-hand side, with Doan Van Hau finding himself in acres of space on several occasions.
Vietnam took an early lead when Nguyen Tien Linh, who opened the scoring in the 4-0 win over Indonesia on June 7 night, scored from a header in the 26th minute.
Luong Xuan Truong's corner was headed up in the air by Malaysia’s captain Aidil Zafuan, allowing Hau to head it back across goal for Linh, who nodded home a quintessential poacher’s finish.
The goal seemed to give Malaysia a spark of life and they would have equalised in the 38th minute if it hadn’t been for a superb save from goalkeeper Bui Tan Truong.
The Vietnamese defence was split by a deep cross from Malaysia's Matthew Davies which left Syafiq Ahmad with the goal at his mercy, but Truong reacted superbly to tip his header over from point-blank range.
Truong sprung into action again minutes later to deny Safawi Rasid’s direct free-kick and bring Vietnam into the break with their lead intact.
Malaysia only increased their dominance of the ball in the second half, however Vietnam should have doubled their lead against the run of play in the 64th minute, but Nguyen Trong Hoang put his shot wide after being played in by Nguyen Hoang Duc at the end of a mazy run.
Just five minutes later though, Vietnam were made to pay for spurning that opportunity.
Hau clattered into Guilherme de Paula in the box when the two competed for a header and left referee Ryuji Sato no choice but to point to the spot.
The naturalised striker dusted himself off and converted the penalty to equalise.
In a bid to regain control of a game that was slipping away from his side, coach Park shed his normally defensive instincts by bringing on forwards Ha Duc Chinh and Nguyen Van in what turned out to be a masterstroke.
In the 80th minute, Vu Van Thanh slid a pass towards Toan in the penalty area. Before the forward could collect the ball he tumbled to the floor after his heel was seemingly clipped by Malaysia’s Brendan Gan and was awarded a penalty.
Television replays were inconclusive but did suggest some degree of simulation by Toan, though in the absence of VAR, the penalty stood.

Captain Que Ngoc Hai makes the score 2-1. (Photo: SGGP)
Captain Que Ngoc Hai, seemingly the coolest man in the stadium, stepped up and thumped the ball home to make the score 2-1.
Vietnam were able to hold on for the final minutes without allowing Malaysia to create a decent chance to ensure they came away with a famous win in front of the lucky few Vietnamese supporters in the stands.
The win keeps Vietnam on top of Group G with 17 points, two ahead of the UAE.
The two sides will meet for their final match of the second round of qualification on June 15 night with Vietnam knowing a draw would put them through to the next round. 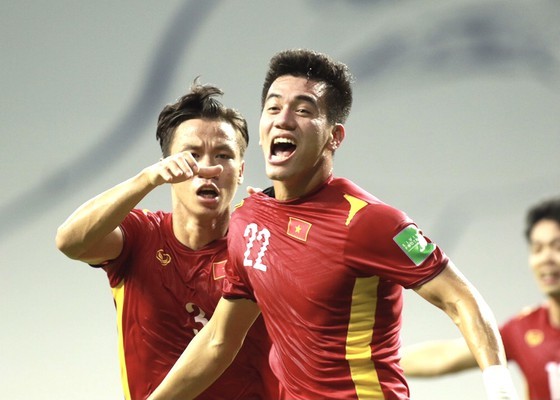