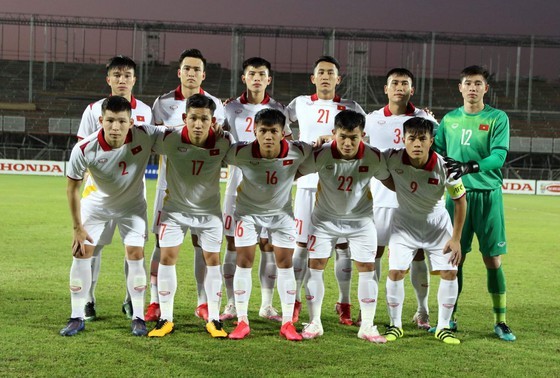 Members of Vietnam National U22 football team
The football match will be broadcast live on On Sports, Next Sports at 5 p.m. this afternoon.
After Hong Kong (China) team has been switched to another group, there are only three teams in Group I including Vietnam, Chinese Taipei and Myanmar. Among the teams, the Chinese Taipei team is considered to be weaker than the rest two ones; however, Coach Chen Junming determined to bring surprise and the team is expected to rank the second of the table as he gathered the players from August.

The Chinese Taipei players arrived in Kyrgyzstan on October 15 for training and to get used to the weather. In addition, the team has three players participating in the Asian Cup qualification, including defender Liang Mengxin, midfielder Wu Yanshu and striker Lin Mingwei. Physical strength is considered as the team’s advantage.

As for the match, the Chinese Taipei team may perform a defensive strategy to gain a draw game.