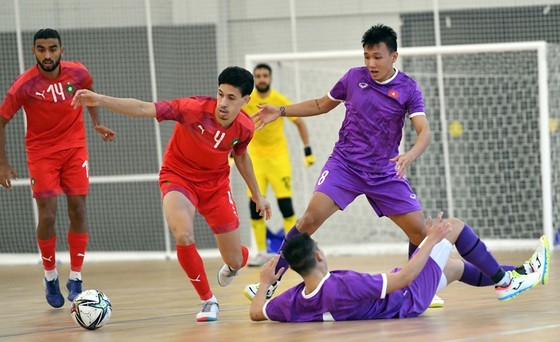 The match between Vietnam and Morocco

The match between Vietnam and Morocco ended with a score of 1-2.
The African champion scored two goals and Vietnamese player Van Hieu shortened the score by a goal at the end of the first half.

In the second half, the game was balanced and Vietnam switched to playing under power-play tactics during the last seven minutes.

During this time, Vietnam received a penalty from Morocco’s fault of hand touch in the penalty area. However, Duc Tung failed to balance the score for Vietnam.
The serial of friendly matches is considered as a chance for the coach to review the positions of the squad for the upcoming FIFA Futsal World Cup 2021.

After four friendly matches, the Vietnam national futsal team will prepare to join the FIFA Futsal World Cup 2021 which will take place from September 13 . Vietnam will confront the first match with Brazil at midnight of September 14, following Hanoi time.