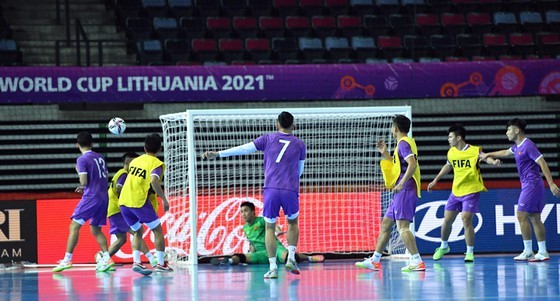 The players perform the first training session to familiarize with the futsal pitch of Klaipeda Arena stadium.
Accordingly, many major sports events had ever happened in the Klaipeda Arena stadium. In order to prepare for the matches of table D of FIFA Futsal World Cup 2021’s final round, the artificial playing surface was ungraded following FIFA standard and the lightning system had also been innovated.
Vietnamese players were very interested in playing in the modern pitch surface with high quality. Coach Pham Minh Giang considered that Brazil is a very strong team with skillful players so the Vietnam futsal team might play under counter-attack tactics.