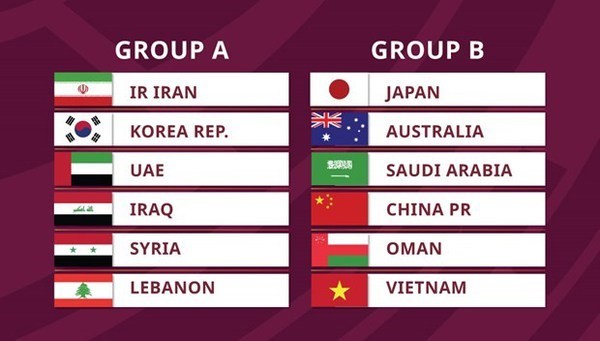 Result of a draw for the third round of the 2022 World Cup Asian qualifiers (Photo: AFC)
Meanwhile, Group A includes the Republic of Korea and the five West Asian squads of Iran, the United Arab Emirates (UAE), Iraq, Syria and Lebanon.
The groups’ top teams and runners-up will qualify for the 2022 Qatar FIFA World Cup.
Meanwhile, two third-place squads are to face each other and then the winner will play a match with a representative from other continent for a berth at the world's biggest football event.
Vietnam made history for advancing to the third and final round of the World Cup qualifiers for the first time. They were placed in Pot 6 among six groups for the draw, together with Lebanon.
With two wins and one loss in the final matches in Group G of the second qualifiers hosted by the UAE, Vietnam earned 2.79 more points and ranked 11th among 12 teams competing in the third qualifiers.