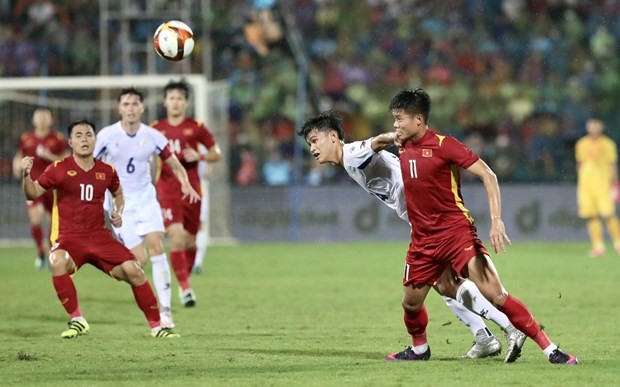 Players of Vietnam (in red) and the Philippines vie for the ball. (Photo: VNA)
U23 Vietnam started their second match with a high mood after their 3-0 win against Indonesia two days ago, while the underdogged the Philippines had a cautious approach although they had a 4-0 win against the Timor Leste also two days ago.
Numerous clear chances came to the Vietnamese young men, but they failed to turn them into goals.
Right after the half time, head coach Park Hang-seo of Vietnam sent in substitutes to increase the pressure on the Philippines, and indeed Vietnam had many more chances, but none could find the net of the Philippines as their defense was effective.
The 0-0 draw saw the Philippines retaining their top position in Group A with four points. They are followed by Vietnam, also with four points.
Vietnam will play Myanmar on May 13.
SEA Games 31, themed “For a Stronger South East Asia”, will be held in the capital and 11 neighboring provinces and cities from May 12 to 23.
Featuring 40 sports with 526 events, it is expected to attract around 10,000 participants. The biennial event was initially slated for late 2021 but delayed due to the Covid-19 pandemic.