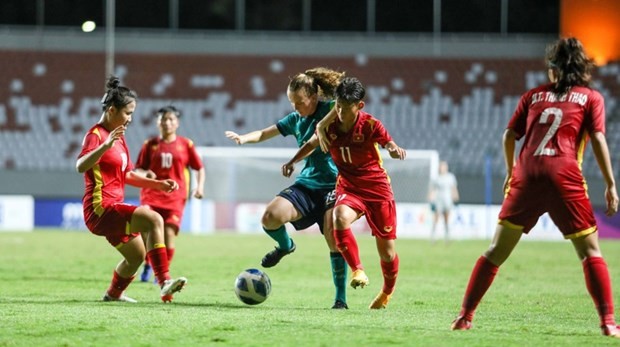 Vietnam (in red) play Australia in the final of the AFF U18 Women’s Championship 2022 on August 4. (Photo: VNA)

Australia dominated the first half of the game, playing on offence due to their physical superiority while the Vietnamese players retreated to defend.

Vietnam’s Minh Chuyen had the first good chance to face the Australian goalkeeper one-on-one just four minutes into the game but her effort was easily denied by an opposing defender.

The Vietnamese players finish the AFF U18 Women’s Championship 2022 as the runner-up. (Photo: VNA)

Australia’s Sienna opened the score from a close range in the 37th minute. Australia doubled their advantage seven minutes into the second half after striker Mary Stanic-Floody put a ball into goal keeper Phuong Thao’s net.

Thailand took the third place after beating Myanmar 0-2 in another match.