Andrey Sidorov scored the second goal for Uzbekistan in the last minute of extra time.

Earlier, the two teams had a 1-1 draw in the 90-minute official time.

Uzbekistan scored the first goal with a header in the 8th minute by defender Rustamjon Ashurmatov.

Midfielder Nguyen Quang Hai hit a spectacular free kick to score an equaliser for Vietnam in the 41st minute.

Vietnam has won numerous “wows” by winning its bigger competitors to earn the place close to the champion cup.

The team defeated Australia 1-0 in the group stage. They won Iraq in the quarterfinals and Qatar in the semifinals with penalty shootouts. 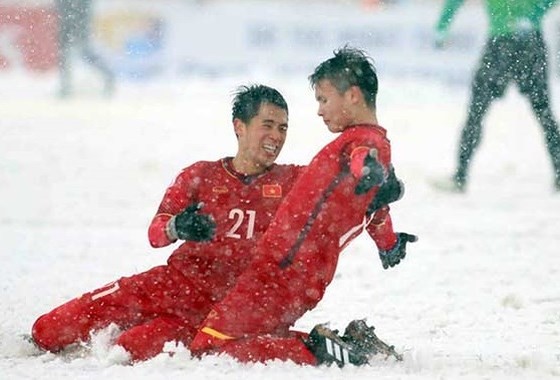 Nguyen Quang Hai (R) celebrates his goal in the first half of the match (Photo: SGGP)

the runner-up at AFC U23 Championship Uzbekistan