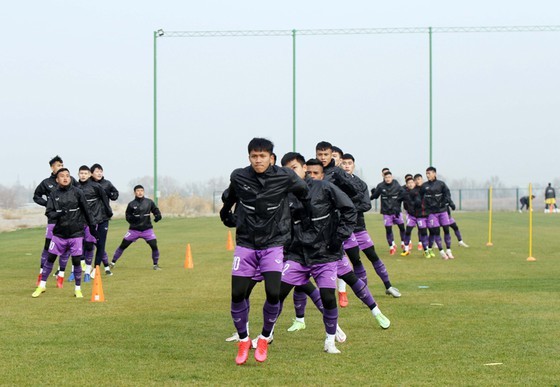 The U22 Vietnam team at a training session on November 1. (Photo: SGGP)
Currently, Vietnam and Myanmar both have three points and are equal in goal difference. Therefore, if the match ends in a draw, each team will still gain one point, but it will have to determine first place in the group through the penalty shootout. The developments in the remaining groups at the end of October 31 are beneficial for both Vietnam and Myanmar. With just a draw, both of them will win tickets to the finals as the first and second teams regardless of the results of the penalty shootout.

In general, the door to advance to the finals of Coach Park Hang-Seo and his players is wide open. However, in fact, the pressure on the Vietnam team is great after an unimpressive opening match against the Chinese Taipei team. In that match, the attack of the Vietnam team revealed many limitations in the shooting skills. Mr. Park threw all available strikers to the pitch to solve the deadlock. However, it was not until the end of the match that he succeeded.

In a recent statement, Coach Park Hang-Seo said that the disadvantage of having a longer rest day was the loss of competition readiness for players. However, in return, the Vietnam team also had time to observe the playing style of the Myanmar team. That was an advantage, but not necessarily the deciding factor, and the Vietnam team would have to prepare carefully for this important match. Mr. Park is cautious and high concentrates on this match because Myanmar is an unpleasant and formidable opponent for Vietnam, especially the encounters in the U23 age group. 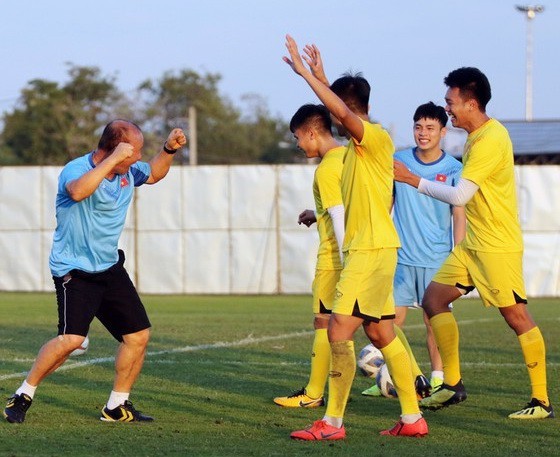 Mr. Park and his players need to win the match against U22 Myanmar to assert themselves. (Photo: SGGP)
At the 26th SEA Games, the Vietnam U23 team received a 1-4 defeat to Myanmar in the bronze medal match. Then, at the 28th SEA Games in 2015, U23 Vietnam, with a squad of excellent faces, also had to stop in the semi-finals when they lost 1-2 to U23 Myanmar. In the continental arena, in the 2013 AFC U22 Qualifiers, U22 Vietnam was also defeated by U22 Myanmar with a score of 1-3. In the last two rendezvous, the U23 Vietnam team won, but those matches were all competitions that were not in the official tournament.

With the successes in the past four years, it is clear that the pressure on the U22 Vietnam team in this match is huge. Will Mr. Park and his players overcome difficulties to assert themselves? It is an important match. If the Vietnam team loses, it will be eliminated. So, there will be definitely no room for experiments like the match against Chinese Taipei. Mr. Park will use all his abilities in this match with the sole target of winning.