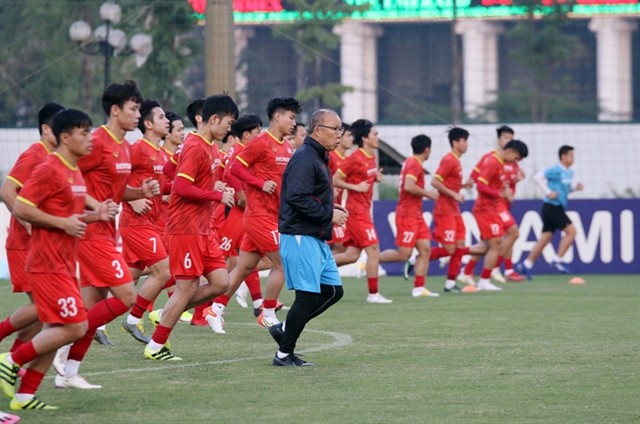 The AFF Championship is a step down in quality from World Cup qualifying for coach Park and the national team. (Courtesy Photo of VFF)
While a pair of 1-0 defeats to two of Asia’s best national teams in Japan and Saudi Arabia is nothing to be ashamed of, taking on opponents closer to Vietnam’s level in the AFF Championship is a good opportunity to bring the feel-good factor back to the national team after six losses on the trot.
While I think long-term it would make more sense to provide fringe players and youngsters opportunities in the regional tournament, the likelihood is coach Park will play the strongest team possible in a bid to retain the trophy they secured in 2018.
Normally, the strongest team for coach Park means a back three consisting of captain Que Ngoc Hai, his Viettel teammate Bui Tien Dung  and Hanoi i FC man Do Duy Manh.
But for the AFF Championship, I think it’s time he ditched three at the back.
Generally speaking, playing with three central defenders is a defensive approach, a set-up to employ when the coach doesn’t think two central defenders are capable of keeping the opposition at bay.
There are of course exceptions, like Thomas Tuchel’s Chelsea, but the vast majority of teams that start three at the back are setting up defensively.
And without meaning any disrespect to Malaysia, Indonesia, Laos and Cambodia, there’s no reason for Vietnam to be defensive in Group B of the AFF Championship.
As defending champions and the only team from Southeast Asia to make it to the final stage of World Cup qualifying (frankly, none of the others were close to qualifying), Việt Nam should be able to take the game to their opponents and make use of their embarrassment of attacking riches.
How exciting would it be to see Nguyen Tien Linh, Nguyen Cong Phuong, Nguyen Quang Hai and Nguyen Van Toan on the pitch together from the start? Which defence in the region would fancy their chances keeping those four quiet for 90 minutes?
While Vietnam will likely have to revert to a more reserved approach when they return to World Cup action next year, it also wouldn’t hurt to give the team some competitive experience playing in a different system.
What’s more, playing a different style would provide another feather in coach Park’s illustrious cap. The greatest coaches are able to adapt their teams to the task at hand, and playing with a bit more attacking ambition would show there’s more to Park than the pragmatist that we know and (mostly) love.
Sir Alex Ferguson didn’t put together 26 years of glittering success at Manchester United by refusing to change with the times, no; he was able to reinvent his teams whenever he saw it was necessary.
The World Cup campaign has illustrated the gulf in class between Vietnam and the top Asian teams, now it’s time for Vietnam to show how far ahead of Southeast Asia they are.