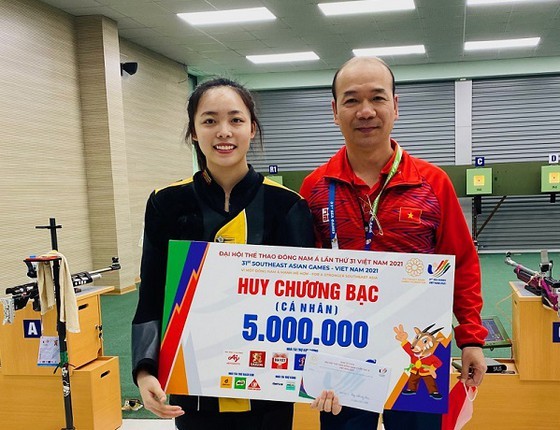 With the achievement of a silver medal, shooter Phi Thanh Thao was awarded a hot bonus of VND5 million (US$218) from the leader of Vietnam Sports Delegation.
This morning, the shooter and her teammate Le Thi Mong Tuyen qualified for the women’s 10-meter air rifle final. After the first 12 shots, Mong Tuyen was eliminated from the final against competitors of Thailand, Singapore and Indonesia with a total point of 120.4.
In the next turns, shooter Phi Thanh Thao continued to hold the top three.

In the last two shots being the 23rd and 24th shots of the final, athlete Thao was the second runner up with 246.2 points to win a silver medal. This was also the first medal from Vietnam’s shooting team.

The gold medal belonged to Indonesian shooter Mubarokah with 247 points.

On the competition day, Vietnam’s shooting team is waiting for more medals in the 25-meter rapid-fire pistol.