Then, the national team visited Mausoleum of President Ho Chi Minh to report their achievement at the tournament.

Speaking at the meeting, PM Nguyen Xuan Phuc said that he waited for over five hours to meet the footballers; and he expressed his pleasure at success and efforts of the Vietnam national under-23 team as Vietnam came the second and  became the first Southeast Asian country to enter the final of the AFC U23 championship.

Head of the Vietnamese Under 23 football delegation Duong Vu Lam reported competition process of the footballers, and Chief of Government Office Mai Tien Dung announced a decision to certificate members and outstanding individuals at the 2018 AFC U23 Championship in China. 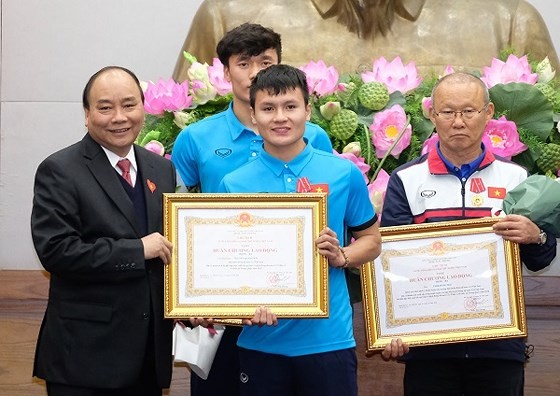 Vietnam won the second- best in the final of AFC U23 Championship after losing Uzbekistan 1-2. In addition, Vietnam also won Fair Play award.

On the same day, the footballers and coach board of the national team participated in Gala at My Dinh National Stadium.