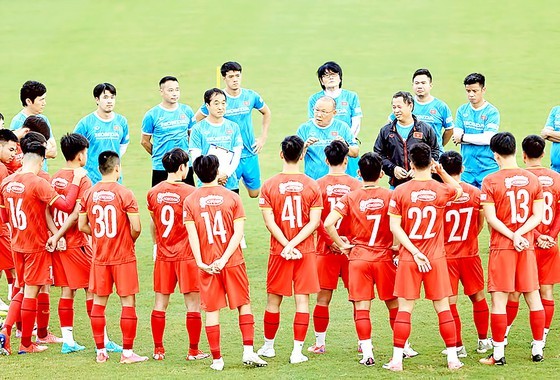 Coach ParkHang-seo and his players in a training session before the match against Oman. (Photo: SGGP)
The public was somewhat disappointed about the rigidity of the playing style and squad arrangement of the Korean strategist, which partly created psychological pressure on both Coach Park Hang-seo and his players. Mr. Park frankly took the blame for the failure in the press conference after the 2-3 loss to China. So at this moment, the public needs to show sympathy to motivate Que Ngoc Hai and his teammates to overcome difficulties.

Oman is not an easy opponent to beat. Oman's attacking style is fairly diverse, based on the midfield quartet, Al Saadi, Fawaz, Zahir Al Aghabari, and Al Yahyaei. However, in the match against the Vietnam team tonight, Coach Branko will not have the service of Al Aghbari due to injury. As a result, the pressure from the high-speed balls on the right side will be lessened for the Vietnam team during the away match in Oman.

The defeat against China has pointed out a major problem in the defense of the Vietnam team. In addition, using the same set of players for a long time has created a large experience gap between the main players and substitutes. Thanh Binh's distraction when replacing Tien Dung is an example. Therefore, Vietnamese football fans expect that Mr. Park will create positive adjustments for the defense in the upcoming match. 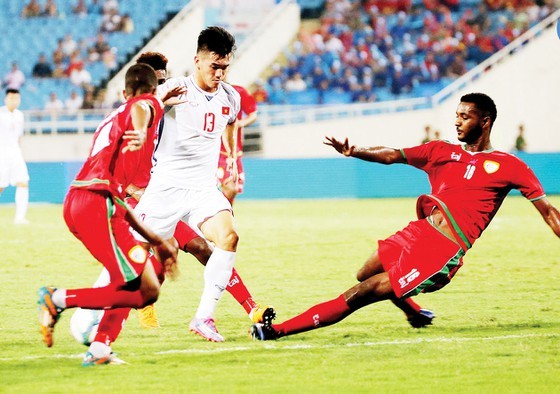 Tien Linh (C) used to meet the Oman team in the 2018 Vinaphone Cup. (Photo: SGGP)
Moreover, Mr. Park will possibly adjust two positions in the starting lineup, including the right-winger and the attack line, compared to the match against China. Ho Tan Tai, who appeared on the pitch at the beginning of the second half against China and shone with a super shot to shorten the score to 1-2, will possibly be the option to replace Van Thanh, who did not make much of an impression, on the right side.

Similarly, the position of Phan Van Duc, who was in the starting lineup for four matches in a row but remained deadlocked, may be replaced with Cong Phuong to seek something more innovative. The central midfielder position is also subject to adjustment when Thanh Chung is ready to start in place of Tuan Anh to create certainty and safety for the defense from afar against powerful midfielders of the home team.

The match between Vietnam and Oman will be aired on VTV6 at 11 p.m. tonight.