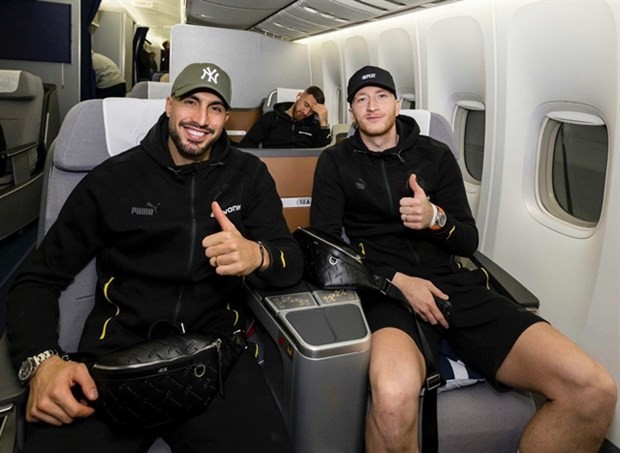 Emre Can and Marco Reus (right) pose for a photo on a plane starting their Asia Tour. They will land in Vietnam on November 29 and have a friendly with Vietnam's national team a day later in Hanoi. (Photo courtesy of BvB)
The Black and Yellows will travel to Singapore and Malaysia before coming to Vietnam as part of their 10-day tour.

Edin Terzic’s side will go up against Singapore Premier League club Lion City Sailors at Jalan Besar Stadium on November 24. They will then head to Malaysia to face the Johor Southern Tigers on November 28 and the tour will conclude in Hanoi with Borussia Dortmund taking on the Vietnam national team on November 30.

Among the other 98 members of the travelling party are coaches and assistants, doctors, physiotherapists, kit men, nutritionists and security guards.

Dortmund's CEO Hans Joachim Watzke, other officials and legends of the team such as goalkeeper Roman Weidenfeller and defender Patrick Owomoyela will also join the delegation. They will stay in four five-star hotels in Hanoi's center.

After check in, Reus and his teammates will participate in different activities such as learning how to cook Vietnam's most famous dish of pho (noodle soup with beef or chicken), visit the city's landmarks, take part in a freestyle football show and meet with local students and supporters.

On November 23, Vietnam coach Park Hang-seo and his players had their first training in Hanoi.

They have one week to work together at the Vietnam Youth Football Training Centre to prepare for the friendly match on November 30.

The game, organized by the VFF, VPF and Next Media at My Dinh National Stadium, is a test for Vietnam ahead of their AFF Cup in December.