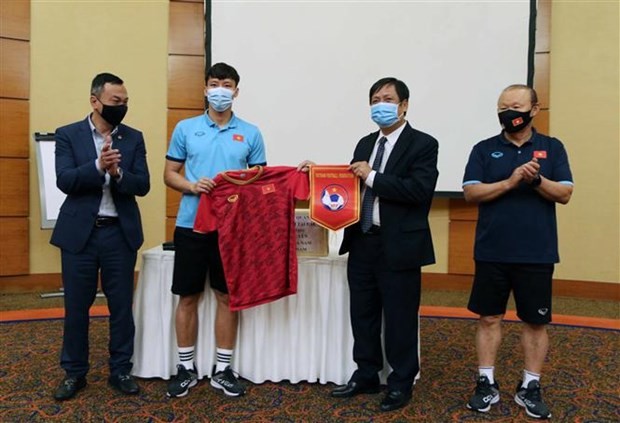 A member of Vietnam men's football team presents a souvenir to Vietnamese Ambassador to the United Arab Emirates (UAE) Nguyen Manh Tuan (second from right) (Photo: VNA)
The ambassador rejoiced to see two Vietnamese football teams come to the UAE to compete at major tournaments.
Noting the futsal team’s success in securing a berth at the FIFA Futsal World Cup for the second time, Tuan voiced his hope that the national team will fulfil the set target and win a place in the third round of the qualifiers.
The diplomat said that despite the adverse impact of COVID-19, the Vietnamese community in the UAE is eager to cheer for the national squad in the three upcoming matches.
The Vietnamese Embassy also stands ready to support the team during training and competing in the UAE, Ambassador Tuan pledged, wishing all members to maintain their spirit and confidence to surmount challenges.
For his part, Permanent Vice President of the Vietnam Football Federation Tran Quoc Tuan thanked staffers at the embassy for their support.
He informed that the Vietnamese fans may attend the matches, as the host country has allowed spectators to come to see matches at 30 percent of stadium capacity.
After one day of rest after a friendly with Jordan, the team will resume training on June 2.
Vietnam will play Indonesia on June 7, Malaysia four days later, and hosts the UAE on June 15.