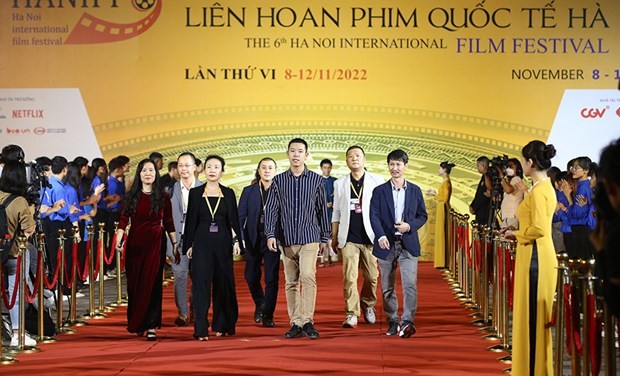 With the theme "Cinema - Humanity, Adaptation and Development", the festival, jointly held by the Ministry of Culture, Sports and Tourism and the Hanoi People’s Committee, aims to honor excellent international and Vietnamese cinematographic works with high artistic value, imbued with humanity and creativity in cinematic language.

Speaking at the opening ceremony, Minister of Culture, Sports and Tourism Nguyen Van Hung said that the festival offers a chance for Vietnamese and foreign artists to exchange experiences to contribute to developing Vietnamese, regional and international cinemas.

This is also an opportunity to boost the domestic film industry and its integration into the world market while simultaneously promoting the image of Vietnam as a safe, friendly, peaceful, hospitable, integrating and developing country, he added.

Together with the opening ceremony, the closing and award ceremony will be held at the Friendship Palace at 91 Tran Hung Dao street on November 12 and broadcast live on the national Vietnam Television (VTV).

Eleven long films and 20 short ones have been selected for the contest. The long works are produced by India, Poland, Iran, France, Brazil, Spain, Sri Lanka, Myanmar, Kazakhstan, the Philippines, and Vietnam.

Activities such as film screening and the film project market are scheduled at Daewoo Hotel, as well as two seminars with themes about the Republic of Korea (RoK) cinema spotlight and film production, distribution and dissemination to overcome the Covid-19 pandemic. 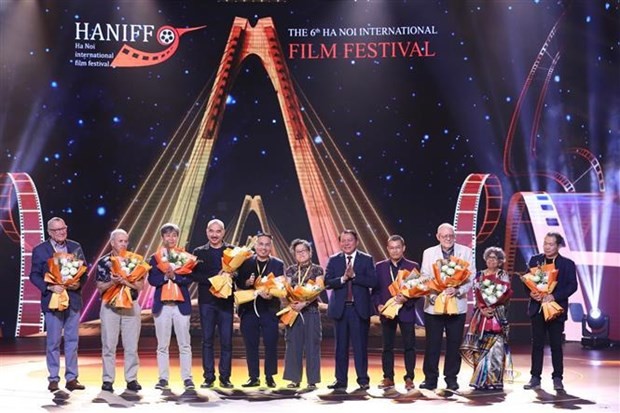 There will also be an outdoor movie screening area and a movie star exchange program on November 9, 10 and 11 in the center of Hanoi.

Sightseeing tours through some attractive destinations around Hanoi and nearby Bac Ninh city will be offered to guests and participants on November 11.

An exhibition showcasing Hanoi’s various historical relic sites and cultural heritages featured in films is taking place in the capital city as part of the HANIFF VI.

Hosted by the Vietnam Film Institute from November 8-12, the event is expected to introduce cultural traditions, the love of peace, and the development of Hanoi to audience and international friends.

On display are more than 200 photos of numerous relic sites and cultural heritages, which were settings of cinematographic works used by both local and foreign filmmakers.

Particularly, about 150 photos are selected from 29 feature films and documentaries, and about 50 others show the true beauty of Hanoi in the past, as well as its recent development taken by filmmaker Pham Thanh Ha, photographers Nguyen Huu Bao, and Hoang Huu Khanh.

The exhibition offers a chance for visitors to see scenes from Hanoi in famous films, including “Hanoi Mua Chim Lam To” (Hanoi in the season for birds to build nests), “Em be Ha Noi” (The Hanoian Little Girl), “Sao Thang Tam” “Dien Bien Phu”, “Mua oi”, “Ha Noi 12 ngay dem", among others.

The biennial Hanoi International Film Festival was first organized on October 17-21, 2010, as part of the activities to celebrate the 1,000th anniversary of Thang Long-Hanoi. The first edition aimed to celebrate Asian cinema, promote cultural exchanges and foster further development cooperation between regional and international filmmakers through the showcase of the latest films by talented directors, especially those from Southeast Asian countries. It also aimed to build a new film festival brand and affirm the position and integration trend of Vietnamese cinema in international cinematography and attract the attention of world filmmakers to Vietnamese cinema, within the strongly renewing and developing country of Vietnam. In 2020, the festival was cancelled due to impacts of the Covid-19 pandemic.