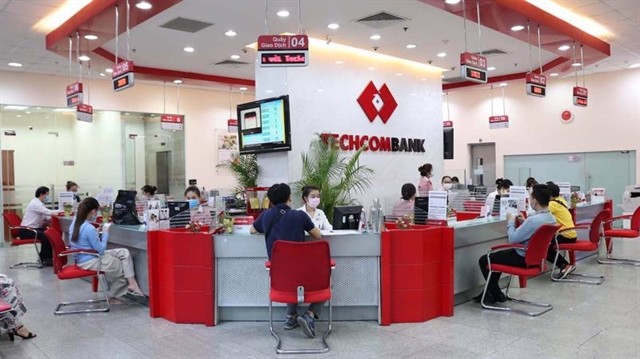 Techcombank's office during working hours. The bank shares rose the most yesterday, up 6.81 per cent. Photo vneconomy.vn

The market benchmark VN-Index on the Ho Chi Minh Stock Exchange (HoSE) inched down 9.14 points, or 0.64 percent, to 1,411.13 points. However, the index claimed back some losses from the morning's fall.

The market's breadth was still negative with 287 stocks declining, while 112 stocks rose.

The market liquidity was also high as nearly 817 million shares were traded on the southern market, worth over VND28 trillion (US$1.22 billion).

Profit-taking activities weighed on the market since it opened the morning session with many big stocks recording great losses. However, strong increases of some other large-cap stocks limited the fall.

The VN30-Index, which tracks 30 biggest stocks in market capitalization on HoSE, still climbed 0.21 percent to 1,557.79 points. Twenty-two stocks of the VN30 basket slid, while only eight stocks surged.

While some bank stocks like Vietcombank (VCB) and Vietinbank (CTG) plunged more than 1 percent on Monday, some others like Techcombank (TCB), Asia Commercial Bank (ACB) and Sacombank (STB) were up more than 3 percent.

Mobile World Investment Corporation (MWG) was another stock posting positive performance with a gain of 6.19 percent, helping the market pare some losses.

As the new trading system created by FPT Corporation (FPT) started to operate on Monday, many analysts expected that the market's sentiment would be positive and the market benchmark would reach new highs. However, the market went against those expectations.

During the trading session, nearly 143.5 million shares were traded on HNX, worth VND3.4 trillion.

Saturday, January 28, 2023 15:33
The Ministry of Industry and Trade (MoIT), on January 27, said that the petroleum sale in Ho Chi Minh City was stable. Petrol stations normally operated to serve the travel needs of people, and there was no situation of hoarding and overcharging.