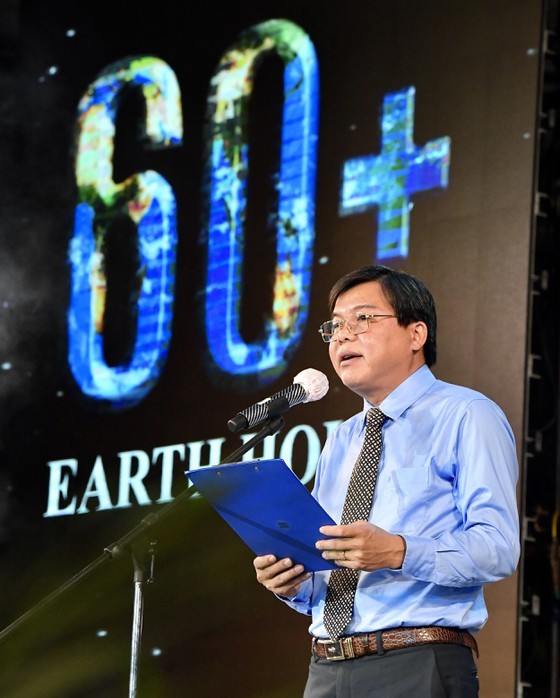 Speaking at the ceremony, Mr. Tang Huu Phong, Editor-in-Chief of SGGP Newspaper, said that the Earth Hour campaign is a movement held by the World Wildlife Fund (WWF) since 2007.

Accordingly, the event calls on the world community to turn off non-essential electric lights for one hour, from 8.30 p.m. to 9.30 p.m. on the last Saturday of March every year. Over the years, the purpose of this campaign has expanded in the direction of encouraging the community to change living habits beneficial to the environment and use energy more economically and efficiently.

“From its started points in Australia in 2007, the Earth Hour has been responded to in nearly 200 countries and territories around the world, with more than 2 billion participants. Especially, in 2018, the Earth Hour also received a response from the International Space Station as a strong mutual determination of the world to protect the environment. Vietnam has joined the Earth Hour campaign since 2009. Over the past 14 years, the Earth Hour Campaign in Vietnam has risen to the top ten countries with the most creative and effective projects to improve environmental quality,” said Editor-in-Chief Tang Huu Phong.

The lights-out event in response to the 2022 Earth Hour was livestreamed by the organizers via the website of Vietnam Earth Hour, on SGGP Online Newspaper, and SGGP Newspaper's social networking platforms.

The organizers also directly connected activities to respond to the one-hour lights out with thousands of volunteers from 63 provinces and cities nationwide and millions of volunteers in more than 5,000 cities of nearly 200 countries.

Activities of the Green Steps Project were carried out on the morning of March 26, attracting 1,500 volunteers and youth union members. Athletes who participated in the 3,500m distance and completed the route within the allotted time would receive a Green Steps Completion Certificate. 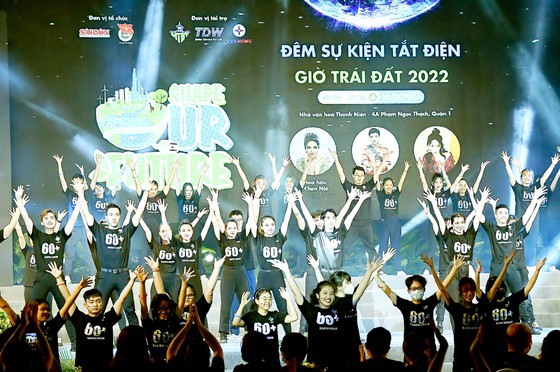 HCMC young people respond to the 2022 Earth Hour Campaign at the Youth Cultural House. (Photo: SGGP)
From March 13 to now, several environmental protection projects launched by the organizers in response to the 2022 Earth Hour have been deployed by thousands of volunteers across the country and abroad. They include the Green Movement activity which encourages the community to give priority to using environmentally friendly vehicles; the activity to increase the green areas, organizing the planting of 1,000 trees along roadsides, canals, and river banks in suburban districts; the program "Joining hands to use green energy", with the installation of the solar power system at the Children's House of Binh Tan District, the renovation of the electricity grid system and the lighting system in alleys, and the free replacement of electricity system for underprivileged families in the city. As for the Green Messages Project, the regional team leaders will recruit volunteers in their area and choose the environmental messages for their groups. For Living Safely with Plastic Project alone, volunteers have mobilized thousands of individuals, organizations, and businesses to appropriately deploy three solutions, including classification, transfer, and treatment, thereby reducing the harmful effects of plastic waste in the ecosystem and environment. Another project that is considered relatively attractive is Green Food, where volunteers create many short videos promoting agricultural and non-agricultural products, local services, OCOP products, and creating dishes from green food on the TikTok platform.

“It is difficult to put into words the contributions of the volunteers participating in the 2022 Earth Hour Campaign and many generations of volunteers participating in the Earth Hour Campaign over the past 14 years. The organizers would like to express their sincere thanks to all the volunteers and units, such as HCMC Urban Environment Company Limited, HCMC Power Corporation, Thu Duc Water B.O.O Corporation, and New Trends Athena Company, for having always accompanied and stood side by side with the program throughout the years. I hope that in the upcoming journey with comprehensive innovation and long-term maintenance of this campaign, it will create many young generations who love the environment and are willing to take action to improve and protect the quality of their living environment," SGGP Newspaper Editor-in-Chief Tang Huu Phong emphasized.