At the meeting, Vice President Venkaiah Naidu welcomed Secretary of the Ho Chi Minh City Party Committee Nguyen Van Nen and the high-ranking delegation of Ho Chi Minh City who are paying an official visit to India. Recalling the deep impression of the country, people, and culture of Vietnam with many similarities between the country and India, Mr. Venkaiah Naidu thanked the Government and people of Vietnam for their timely support during the most difficult time in India in the prevention of the Covid-19 epidemic.

Mr. Venkaiah Naidu also highly appreciated the role of Vietnam in the region and the world especially the achievements of socio-economic development and efforts to prevent the Covid-19 epidemic as well as the resilience and economic growth of Vietnam.

Expressing his concern for the agricultural sector, Mr. Venkaiah Naidu commented that Vietnam in general and Ho Chi Minh City, in particular, have strengths in the field. Therefore, Mr. Venkaiah Naidu hoped that the two sides would continue to support and share to jointly develop this field and ensure food security in the coming time.

In response, Secretary of the Ho Chi Minh City Party Committee Nguyen Van Nen expressed his pleasure to visit and work in India. He affirmed that the traditional friendship between Vietnam and India has been cultivated and developed by generations of leaders and people of the two countries. The deep historical and cultural ties and common interests on many important international issues serve as the basis for effective cooperation and mutual support, including with HCMC. 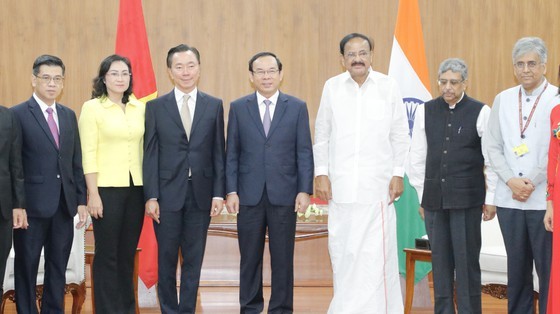 The Secretary of the Ho Chi Minh City Party Committee expresses his deep gratitude to the Government and people of India for timely supporting Vietnam in general and Ho Chi Minh City in particular in the recent Covid-19 epidemic prevention and control (Photo: SGGP)

Emphasizing India's important role and contributions in the region and the world along with sharing its vision and strategic interests, the Secretary of the Ho Chi Minh City Party Committee expressed his deep gratitude to the Government and the Indian people who have promptly supported Vietnam in general and Ho Chi Minh City in particular in the recent Covid-19 epidemic prevention and control.

Mr. Nen said that the southern metropolis has controlled the epidemic and it is developing strongly socio-economically, maintaining its role as the country's economic hub. In particular, the Indian community living in Ho Chi Minh City is the largest in the country, contributing to promoting culture and tightening the good relationship between the two sides.

According to Mr. Nen, in the coming time, Vietnam - India in general and India - Ho Chi Minh City, in particular, have a lot of potentials to continue to develop strongly in the fields of defense - security, commerce, information technology, digital transformation, tourism, and cultural exchange.

Additionally, the southern largest city pins its hope on the potential of tourism cooperation when the demand for cultural exchange and tourism rises.

On the same day, Secretary Nguyen Van Nen and the delegation also paid a courtesy visit to the President of the Indian People's Party Prakash Nadda, and worked at the Ministry of Foreign Affairs of India. Moreover, the delegation also talked with officials and employees of the Vietnamese Embassy in India.