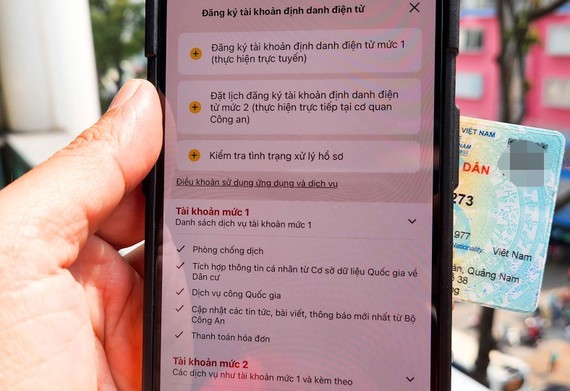 The registration of an e-ID account via VNeID is still not smooth, especially the data connection and receipt step. (Photo: SGGP)

VNeID was formally introduced by the Ministry of Public Security on July 18, 2022 as a measure in population database management, a part of the national digital transformation process.

With his newly issued citizen identification card, Tran Duong from District 5 of Ho Chi Minh City eagerly registered for an e-ID account via VNeID, already installed on his smart phone. After a few times entering his personal information and scan the QR on his ID card, he still could not sign in the app, continuously receiving the message ‘System error. Please try again later.’

Luckier than Duong, Ms. Thanh Hang next to him was able to sign in VNeID to enter the registration phase for level-1 e-ID account. She was asked to use the NFC function on her smart phone for the app to receive information on her ID card, yet could not finish the steps. Understanding the convenience of VNeID, they decided to try again after a few days to own an e-ID account.

Until October 20, 2022, nearly 11.2 million e-ID accounts were successfully activated, 11 million of which are at level 2 (completing directly at a police station). These accounts are integrated with essential information, including basic identity information on an ID card, health insurance, and driving license.

Thanks to that, with a level-1 e-ID account on VNeID, citizens can display certified personal information in any transactions asking for such data. With a level-2 e-ID account, they now do not need to bring along the hard copies of their identification papers (citizen ID card, health insurance card, driving license). This information display has been certified by the Police Department for Administrative Management of Social Order (C06 – under the Public Security Ministry) as a legal way.

VNeID accounts have been used for 30,000 times to sign in the national public service portal to submit administration documents online.

However, in reality, some people reported that when they presented such information via VNeID, installed on their mobile phones, the security force at airports refused to let them pass and still asked for the hard version of their ID card. This is explained as being so new a way that certain security forces have not been timely updated. The Public Security Ministry is working with other ministries and state agencies to delivered detailed instructions regarding the use of VNeID to replace the presentation of a real citizen ID card.

At the meeting of the task force for the implementation of the Government’s Project 06 (Developing an Application for Population Database, Digital Identification and Authentication for the National Digital Transformation from 2022-2025, with a Vision to 2030), Minister of Public Security To Lam admitted that the adoption of Project 06 is still limited as some state units have not finished their assigned tasks.

Besides comments collected from CH Play and AppStore for VNeID, C06 is now using the hotline 1900 0368 to receive feedbacks and reports on problems related to the use of this app or electronic identification accounts. The Fanpage of the National Population Database Center is also a channel for such feedbacks. C06 will use these information pieces to upgrade the app to increase positive experiences for users in the upcoming versions.