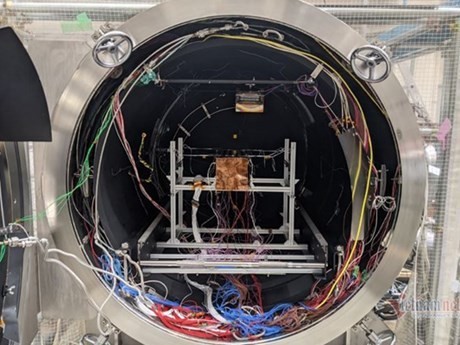 Tuan said the transfer took place on August 17. The satellite is expected to be launched into orbit at the height of about 560km from the Uchinoura Space Center in Japan’s Kagoshima prefecture in late 2021.
The NanoDragon satellite, a nano-layer cubesat satellite which weighs 3,8kg kilograms, was developed by the VNSC. It was developed with the purpose of using micro-satellite beam technology to track and monitor activities at sea.
The satellite is the product of a project to design, manufacture, launch and test operation of a nano-sized microsatellite under the national space science and technology program in the 2016-2020 period.
The process of researching, designing, integrating, and testing the satellite's functions was carried out completely in Vietnam by VNSC researchers.
Previously, the VNSC also successfully developed the 1-kg-microsatellite PicoDragon, and the 50-kg satellite MicroDragon, which were launched into orbit in 2013 and 2019, respectively.