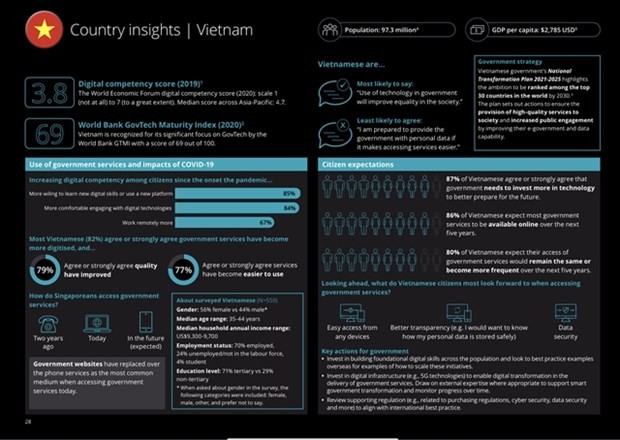 A report commissioned by VMware and conducted by Deloitte titled “Digital Smart: Advancing digital government for citizens in the Asia-Pacific" found that 85 percent of respondents in Vietnam are willing to learn new digital skills or use a new platform and 80 percent expect to access government services at the same rate or more frequently in the next five years.
The research found that citizens of APAC member countries are more digitally engaged than ever, but governments still lag in the delivery of digital services.
The study found that the use of in-person government services halved across APAC nations in the last two years, and 77 percent of citizens now primarily use a digital platform to access government services.
However, 67 percent of respondents expected the quality of government services to be on par with those offered by the private sector, with 41 percent of people struggling to access digital services on their own given a lack of basic digital skills and shortfalls in digital infrastructure.
With 900 million new internet users expected to be added to the region that includes Australia, Singapore, Indonesia, Vietnam, India, Japan, and the Republic of Korea by 2025, the need for investment in digital services by governments continues to grow.
Sylvain Cazard, senior vice president and general manager, Asia Pacific and Japan, VMware said: “It’s clear from the Deloitte research that citizens expect the same level of services – and quality – as those delivered by private companies or organisations. Service delivery in terms of multi-cloud infrastructure as well as modern containerised applications and services are the way forward, so governments also need to align thinking and resourcing along these major trends to meet their citizens’ needs.”
This report brings together the latest trends of digital government services across Asia-Pacific, including citizen experience in digital government and their expectations of how governments should deliver their digital services in the future. To develop this report, Deloitte surveyed 3,840 citizens across seven markets in Asia-Pacific in March and April 2022.