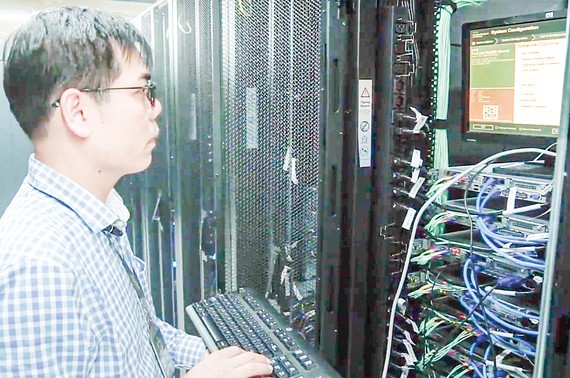 The supercomputer system of Viettel

Viettel’s supercomputer uses computational acceleration technologies, network switches, and synchronous software that are similar to those of the Top-500 supercomputers in the world.

Deputy General Director of Viettel Group Nguyen Dinh Chien shared that his organization determinedly invests in AI to fulfill its role as the main force in establishing a digital society. This investment lets Viettel easily attract AI talents and experts, ready to take on important AI missions of the nation. It is also a tool to turn Viettel into a global pioneer in implementing AI solutions in life and to positively boost the overall revenue.

Similarly, VinAI Research (a member of VinGroup) has just installed the most powerful AI supercomputer system in Southeast Asia named NVIDIA DGX SuperPOD. This supercomputer, which is 10 times as fast as the current NVIDIA DGX A100 system owned by Vin AI, will aid in the development of self-propelled electric vehicles and medical care devices for not only domestic demands but also international ones.

Head of VinAI Research Bui Hai Hung expressed his hope that in this May, a cluster of 20 new DGX A100 systems will be connected to NVIDIA Mellanox HDR, an InfiniBand network at the speed of 200Gb/second. The appearance of DGX SuperPOD is supposed to offer a favorable environment to nurture global-leveled Vietnamese AI talents.

Since 2018, FPT Group has been one of the pioneers in Vietnam to employ supercomputers in its AI research, focusing on the tasks of language and image processing. At that beginning stage, DGX-1 was the latest supercomputer by NVIDIA, and FPT Group was the first in the country to own such a powerful machine. Thanks to that, FPT Group was able to save much cost and effort in carrying out its projects, speeding up its research, and creating useful products.

The Management Board of FPT Group stressed the critical role of supercomputers in AI research, saying that they can accelerate the research process by 96 times compared to using the deep learning model on the traditional CPU machine. This means a task that usually takes a month to finish can now be done in one to two days, which is extremely time-efficient.