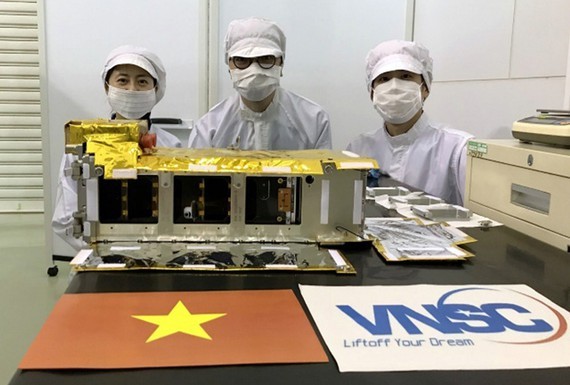 NanoDragon satellite to be launched into orbit tomorrow in Japan.

VNSC was established on September 16, 2011 as a result of Decision No.1611/QD-TTg by the Prime Minister to focus on space technology and its related applications in Vietnam. Its Director General Dr. Pham Anh Tuan informed that VNSC’s vision is to become the national space center.

For the last 10 years, VNSC has formed 4 main pillars of space technology, space applications, space knowledge training, and space knowledge dissemination. Its priority is the creation of domestic satellites.

On October 19, 2013 a cubesat one-kilo made-in-Vietnam satellite named PicoDragon by its developer VNSC was successfully launched into orbit and communicated with its earth-based station. This is one historic milestone of satellite technology development in Vietnam.

Following that achievement, VNSC commenced a new project for another cubesat satellite called MicroDragon with the weight of 50kg in Japan. 36 engineers of VNSC were sent to Japan to pursue a master degree in space technology while participating in designing and making MicroDragon under the supervision of Japanese professors. The satellite was successfully launched on January 18, 2019 at the launch pad of Uchinoura Space Center.

VNSC has built Vietnam Data Cube system, storing nearly 100,000 satellite images about Vietnam taken legally from international partners like the Japan Aerospace Exploration Agency (JAXA), the European Space Agency (ESA), the United States Geological Survey (USGS). In the upcoming time, this system will be used to mainly monitor rice fields and forests in Vietnam, along with other useful applications to outlook floods and landslides

Since 2017, VNSC has developed a Nano-layer satellite named NanoDragon, weighing 4kg. Its design, integration and functional tests were conducted entirely in Vietnam by VNSC researchers. Its has two main missions of Automatic Identification System (AIS) for sea vessels tracking and monitoring; optical sensor for taking pictures to verify the performance of the satellite attitude control system on orbit.

In the middle of this August, NanoDragon was transported to Japan for the final examination stage before its launch date on October 1, 2021 at the launch pad of Uchinoura Space Center.

At present, VNSC is carrying out a project to create satellite system LOTUSat-1, equipped with Synthetic Aperture Radar (SAR) by NEC Corporation from Japan. The satellite with a weight of around 570kg will send high resolution images of the earth to its ground system for timely and precise information to be used in measures against natural disasters and climate change as well as natural resources management, environment monitoring. The satellite is planned to launch at the end of 2023.

For a sustainable development, VNSC has invested in infrastructure upgrades to serve research missions and satellite piloting of up to 180kg.

Recently, besides cooperation with JAXA, VNSC has accepted the invitation by NASA to join in the Artemis project to send scientific equipment and human beings to the Moon in 2024.