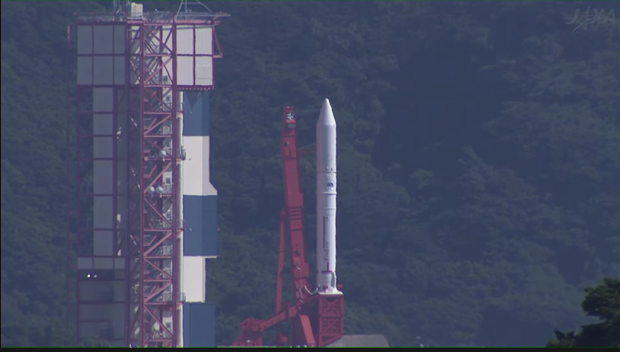 JAXA on October 1 suspends the launch of its fifth Epsilon rocket some 19 seconds before the scheduled liftoff. (Screen shot)

The rocket is carrying nine small satellites, including Vietnam’s NanoDragon.
According to JAXA, a glitch occurred at ground radar equipment that monitors the Epsilon-5's position and speed, located near the rocket's launching pad. It might cause a problem in tracking the Epsilon-5, the agency said.
JAXA urgently called off the launch from its Uchinoura Space Center in the town of Kimotsuki, Kagoshima Prefecture, southwestern Japan, after it had started counting down to the liftoff time of 9:51 am on October 1 (local time).
JAXA said that there were no problems with the Epsilon-5 itself or the nine small satellites of universities and private companies that the rocket is carrying.
A new launch date has yet to be decided.
The NanoDragon, a nano-layer cubesat satellite which weighs 3.8 kilograms, was developed by the Vietnam National Space Centre (VNSC) under the Vietnam Academy of Science and Technology.
The satellite was delivered to Japan and tested at the Uchinoura Space Centre in Kagoshima prefecture in August before being officially transferred to the JAXA for launching under the second "Innovative satellite technology demonstration" program.