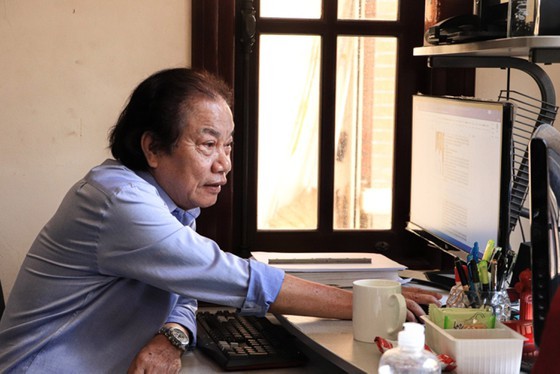 Prof. Dr. Tran Doan Son is working on his computer for meaningful research

Prof. Dr. Tran Doan Son was born in 1954. At the age of 28, he went to Czechoslovakia to finish his doctorate program and received the degree in machine building technology by Plzen School of Electrics – Machine 5 years later. Returning home, he was appointed Head of the Machine Building Department in HCMUT.

In 2002, he was awarded the title Associate Professor of Mechanical Engineering by the Council of Mechanics – Dynamics, followed by the title People’s Teacher in 2020. He has just been awarded the Professor title and the Ho Chi Minh prize for his project ‘Researching, Renovating, and Developing Food and Produce Processing Devices in Vietnam’.

Beginning his teaching career in 1976, Prof. Dr. Tran Doan Son has always believed that teaching is not merely to impair knowledge but to arouse interest and passion among students, to promote creativity instead of simply letting them taking note. Hence, his classes have always been crowded with eager learners, many of whom are unofficial ones.

Prof. Dr. Son thinks that his can achieve such impressive results thanks to the contribution of his students. “Perhaps, the greatest bliss in my career is to help students and witness become more mature and useful day by day”, said Dr. Son.

In 2003, he came up with his first invention – a device and procedure to steam cashews via saturated water vapor, greatly helping laborers to increase the performance of the skin peeling step. Following that first meaningful invention were nearly 200 synchronous production lines being transferred to national and international organizations.

Then Prof. Dr. Son and his partners participated in establishing many automatic cashew processing factories in African countries and India. “Only by innovation and renovation in devising feasible solutions can we release people from labor-intensive work”, Dr. Son thought.

His patented inventions also appear in such food production lines as pho, banh cuon (Vietnamese stuffed pancake), Quang-style promo noodle, rice paper. The technologies of those inventions have been transferred domestically and abroad. The ideas of his inventions mostly come from his care and love for manual workers to release them from labor-intensive jobs.

In 2020, Prof. Dr. Tran Doan Son was given three awards by HCMC for his inventions, including a machine to simplify rice noodle production. Restaurants and hotels can use his invention to create fresh noodle to serve their diners. The technology has been transferred to 9 businesses in the US, Sweden, Japan, and the Republic of Korea.

Day after day, he switches between working on his computer and visiting his workshop, where he can discuss technical matters with his students and engineers, while inspiring them with new passion in the technical field. He feels truly enjoyable and relaxed doing such kinds of work.

Receiving the news of him being awarded the Ho Chi Minh prize for his project ‘Researching, Renovating, and Developing Food and Produce Processing Devices in Vietnam’, his colleagues, students, and relatives all congratulated Dr. Son. However, he just humbly shared that a prize is a milestone to help him reflect on his devoted teaching and research for a better life for everyone.