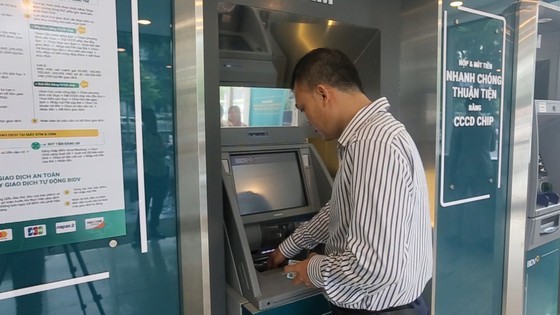 A cardholder is experiencing the use of a chip-based citizen ID card to withdraw money in Hanoi.

Explaining the security feature of the chip installed on citizen ID cards and the one on traditional ATM cards, Deputy Director Nguyen Thanh Vinh said that the former is designed and created in compliance with international security standards for an ID card via advanced technologies. It also applies security principles issued by the Government Cipher Committee. It is ready for the integration of personal information from bank cards and other smart cards.

He then listed the benefits of using this ID card to withdraw money, compared to the use of traditional ATM cards. Firstly, the procedure has a double level of security, one from the bank and the other from the chip itself. When the process begins, a special scanner captures a portrait and fingerprint of card owners to compare with existing biometric data saved in the chip of the ID card. Matching data ignite the next steps of withdrawing money as usual.

Secondly, a loss of an ATM card with the revelation of its password means the possibility of money loss to criminals. However, card thieves cannot do the same with a stolen chip-based citizen ID card, since the newly scanned biometric information cannot match cardholder’s one.

When being asked about the case of a person owning several bank cards wishing to withdraw money via a chip-based citizen ID card, the Deputy Director explained that thanks to the integration among participating banks, as long as a bank account with suitable personal information is saved in the chip, cardholders can carry out the process as usual after the biometric security step.

Discussing the viewpoint that withdrawing money via such an ID card means cardholders are subject to the supervision of the police, he stressed that using ID card for the task merely means stronger security because of an additional biometric identification step through comparison with existing information in the chip. Scanners never stores any personal information of citizens to avoid information leak and ensure data protection. 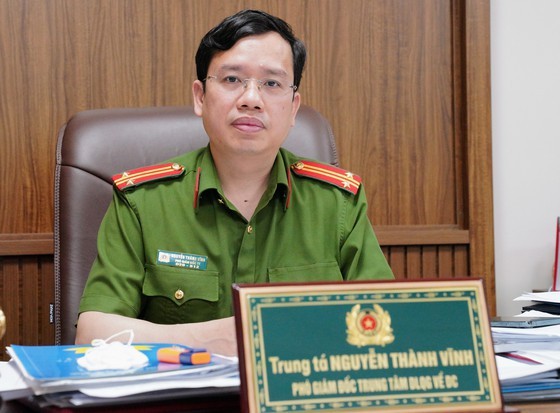 Deputy Director Vinh further noticed that there is no need to acquire an e-identity account to perform the task with a chip-based citizen ID card. All that are necessary are one such ID card and a valid account of a participating bank.

An e-identity account will later have authentication utilities for citizens to conduct online transactions, including those with banks like authenticating information for bank account opening. Current ATMs of each bank will still be under its own responsibility, but they will have a special scanner installed to capture images and fingerprints of people coming to withdraw money for comparison purposes.

Reporting the current status of technical infrastructure and integrated databases among banks, the Deputy Director said that the technical factor is ready, and all that are left are suitable laws for operation. At present, his organization is preparing regulations on personal information protection. Then, citizens are free to decide whether they allow banks or third parties to use their personal information or not.

Finally, as to the time when all citizens can officially withdraw money via a chip-based citizen ID card, he said that after the piloting period with state banks, there will be an evaluation and adjustments will be made for the sake of total security before this process can be applied nationwide.

By Do Trung – Translated by Huong Vuong