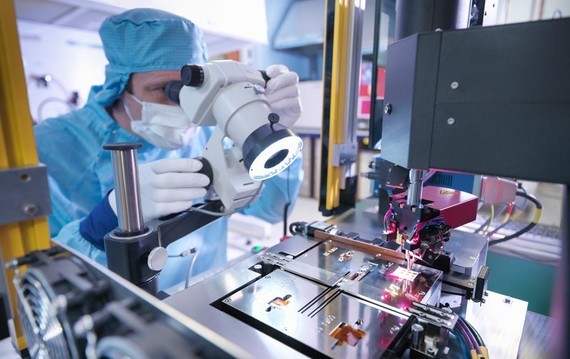 This will contribute to immense Gross Domestic Product (GDP) growth in the coming years, even ensuring that the economic growth in Vietnam remains stable.

Attracting hi-tech sector
In recent meetings with international investors, the question arose whether Vietnam would be able to escape being hit by a global recession next year, when most countries are grappling with slow GDP growth and rising inflation. Vietnam's economic growth rate has accelerated in 2022. Hence, the World Bank (WB) and the International Monetary Fund (IMF), as well as some other global organizations have recently adjusted, and strongly forecast that the GDP growth in Vietnam may surpass 8 percent this year. This has led investors to ask the reasons behind this as compared to other countries in the region.
One reason why Vietnam's economy excels is because the Foreign Direct Investment (FDI) is supporting the manufacturing sector and boosting the complexity of products made in Vietnam. According to a research study conducted by Harvard University, this is important because the increasing complexity of a developing country's products may be the strongest growth driver for that country's economy. Support from Samsung, Apple, and other big FDI companies makes us confident that FDI inflow into the hi-tech sector will continue to drive economic growth in Vietnam for many years to come.
The Samsung company is Vietnam's largest foreign investor, who has now announced that it will start manufacturing semiconductor parts in Vietnam. Apple has also announced that it will start producing Apple Watches and MacBooks in Vietnam. This will be the first time these products are being manufactured outside of China. According to some insiders, Apple has big plans for Vietnam, and they also noted that the Apple Watch is particularly complicated to manufacture because of the challenge of fitting many components into one small case.
Impact on economy
According to research conducted by the London School of Economics (LSE) and the World Bank, FDI is a tool that helps developing economies to move into higher value-added areas of the supply chain, and hi-tech FDI have had a great and positive impact on the Vietnamese economy. Intel and Samsung both had ramped up production in their first factories in Vietnam in 2010, and Vietnam's hi-tech exports have since grown nearly twenty-fold. Besides this, Vietnam has achieved the largest leap in the Harvard Economic Complexity Index (ECI) ranking over the last two decades, partly because investments by Samsung and Intel have attracted other hi-tech investments from Apple, LG Electronics, Dell, and numerous Japanese companies.
The main attractions for businesses setting up hi-tech factories in Vietnam include a highly skilled workforce, lower wages, and proximity to hi-tech supply chains in Asia. The proof is that the US-China trade tension has promoted the shift of production capacity from China to Vietnam. Vietnam's trade surplus with the US more than doubled from US$35 bln in 2018 to $ 71 bln in 2021.
At the same time, the trade deficit with China more than doubled to $54 bln. In a recent announcement, the Biden administration will keep tariffs on Chinese imports unchanged. This basically ensures that multinational corporations will continue to pour capital into Vietnam for many years to come.
GDP growth
According to research by LSE and other universities, FDI has the greatest impact on upgrading a country's economy. The immediate impact of newly announced foreign investments will create relatively high-paying jobs for locals. The Economist magazine noted that Apple's relocation of production units to Vietnam will promote a war for talent. Hi-tech FDI will boost Vietnam's GDP in two ways, namely, raising incomes and also enhancing the country's capacity for complex product manufacturing. This will support short-term GDP growth while boosting the long-term economic outlook, as domestic consumption accounts for two-thirds of Vietnam's GDP.
FDI factories in Vietnam still import most of the raw components they need to assemble products for export, especially for hi-tech products such as consumer electronics and smartphones. It is expected that the imported raw components for Vietnam's exports will gradually decrease, and the contribution of the domestic manufacturing units will increase. It is expected that domestic enterprises will strengthen their ability to supply production input for FDI companies in the coming years. A new wave of FDI investments in the manufacturing of some of the most complex products will also create a spillover effect that will lead to domestic manufacturers diversifying into higher value-added segments in the value chain in coming years.