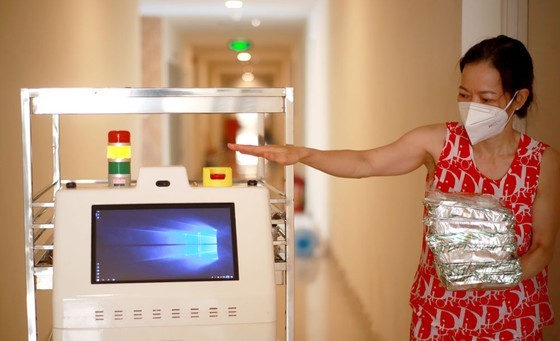 Vibot-2 is delivering essential commodities to patients in Field Hospital No.7

In the last two weeks, Covid-19 patients in Field Hospital No.7, sited in An Khanh Ward of Thu Duc City) have enjoyed the help of a robot when it distributes daily meals to each room three times a day.

According to Colonel Tran Minh Vy from the Military Technical Academy shared that the two robots working in Field Hospital No.7 are among the six developed by his academy with the aim to deliver items around field hospitals. One robot is able to carry 60kg of items or 60 meals, with the pulling power of 100kg.

Tran Minh Tuan, a doctor in Field Hospital No.7 commented that formerly, it took 6 or 7 militiamen around 2 hours to distribute meals for patients in 10 floors of the hospital. Now that there are two robots, the task is done in only one hour with no human resources.

Besides this useful function, the robots are capable of disinfecting rooms, collecting trash, and recording the surrounding areas to send to the monitoring center when necessary. Thanks to that, people from outside the hospital can make video calls with patients inside.

Three robots named Tam An were sent from Hue Central Hospital to Field Hospital No.14 in Tan Phu District to serve patients there. These robots are in charge of delivering meals and common medication to all rooms so that doctors can minimize direct contact with patients.

Lac Hong University has also developed robots for disinfection and stuff transport tasks in hospitals and quarantine sites in Dong Nai Province. Having a camera and face detection sensors, these robots can both distribute meals, medication and ensure that each patient receives his or her precise portion. These robots can disinfect areas having infected people.

They can operate for 3-4 hours non-stop to transport 100kg of items. They are made from highly durable, water-proof materials in accordance with industrial standards.

By Thanh An, Tien Minh – Translated by Huong Vuong