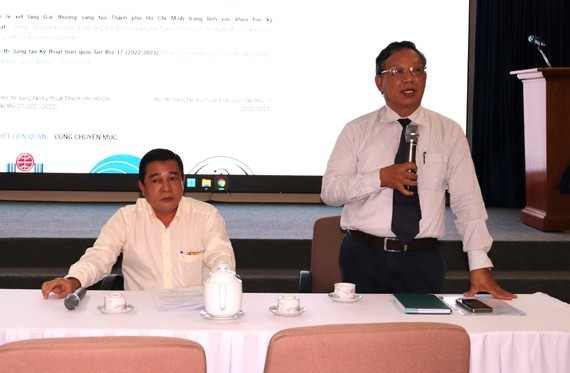 The contest organizers  talk about the launch of the contest
Today, the city Union of Science and Technology Associations in collaboration with the Department of Science and Technology, the Vietnam Labor Confederation, and the Ho Chi Minh Communist Youth Union launched the 27th Ho Chi Minh City Technical Innovation Contest and the third Ho Chi Minh City Innovation Award in 2023.
Accordingly, the Organizing Committee of the Contest received entries about solutions in the fields of electricity, electronics, information technology, telecommunications, mechanics and automation, traffic, biotechnology, agriculture, food technology, materials technology, construction, irrigation, environmental technology, and rational use of resources, saving energy and using new energy, medicine, professional education, and higher education.
According to the Organizing Committee, all Vietnamese individuals in the country and abroad and foreigners working and living in Vietnam can take part in the contest regardless of age, ethnicity, or profession. Individuals, whose research topics or technological solutions have been created and applied to contribute to the construction and development of Ho Chi Minh City in recent years or are being applied effectively, have the right to participate in the contest as a candidate.
The deadline for submission of application forms is December 31, 2022. The winner of the first prize will grasp VND40 million while the winner of the second and third prizes will capture VND32 million and VND24 million respectively. Encouragement prizes are worth VND8 million each.
According to Vice President of the Union of Science and Technology Associations of Ho Chi Minh City Duong Hoa Xo, in recent years, the contest has attracted people from all walks of life including scientists at universities, science and technology institutes and research centers, engineers, technicians in companies and businessmen. Many solutions and initiatives to improve technological processes and technical solutions were introduced at the contest which will be widely applied by many organizations.
Mr. Duong Hoa Xo added that more and more university teachers participated in the contest. Particularly, the 26th Technical Innovation Contest organizer received 202 entries and 27 solutions of them were awarded.
On this occasion, the Ho Chi Minh City Union of Science and Technology Associations also launched the third Ho Chi Minh City Innovation Award in the field of science and technology.
The first prize winner will be given VND200 million while the second prize and third prize winners will receive VND150 million and VND100 million respectively.
The Ho Chi Minh City Innovation Award is aimed at works focusing mainly on seven fields including economic development, security - national defense, state management, creative communication, art literature, science technology, and creative startups. The deadline for receiving the project is March 31, 2023.