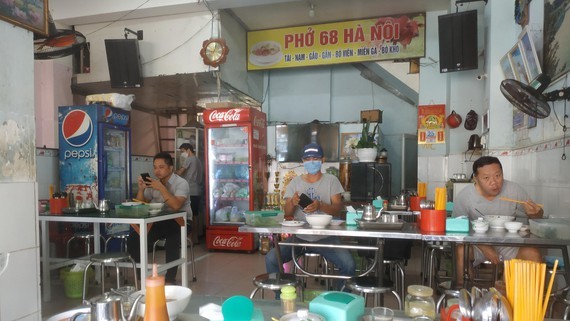 This Hue beef noodle shop attracted quite a lot of customers on the morning of October 28. Rather than getting takeaway, many chose to sit and enjoy. Both owners and customers were thrilled.

Around town, from eateries selling broken rice, noodle soup, beef vermicelli, and pho to restaurants and cafés, was a bustling atmosphere as customers were allowed to eat and drink on the spot once more.

It’s also a sign that some semblance of normality is returning to the city. After looking forward to this day for so long, most establishments had prepared early, from cleaning and sanitising to preparing dishes.

Though Covid-19 lingers, many agree with the city’s decision to allow dining-in again, as long as everywhere and everyone follows pandemic prevention guidelines.

Restaurants and eateries are still not allowed to sell alcohol, however, must close before 9pm every evening, and can only serve at half of their tables.

Ho Chi Minh City has also allowed District 7 and Thu Duc City to pilot dining-in with alcoholic served from October 28. The pilot will last until November 15.