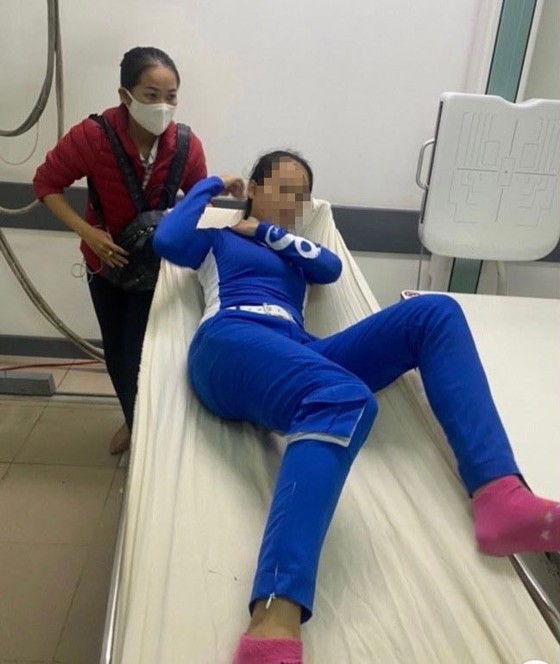 L., the caddie was beaten by N.V.D. with a driver golf club, at the hospital.

“The Standing Committee of the People's Council is responsible for monitoring and verifying information. When there is official information, we will follow the regulations and procedures of the law. If he violates the status of a delegate, he will be strictly handled following the provisions of the law," the leader of the People's Council of Quang Nam Province informed.

Mr. Trinh Minh Duc, Chief of the Office of the National Assembly Delegation and the People's Council of Quang Nam Province, said that according to the regulations of the People's Council, the case could only be identified specifically and correctly from specific information of relevant authorities.

“If a member of the People's Council commits a violation, it will be proceeded according to the regulations. At present, there is only information on social networks and the press. There must be specific information from the competent authorities for the People’s Council to handle it," Mr. Trinh Minh Duc added.

Previously, as reported by SGGP Newspaper, fanpages, groups, and websites of golf clubs in Da Nang and across the country expressed their objection and boycotted N.V.D., Chairman of a real estate business, for his actions of using a golf club to hit L., a female caddie at BRG Da Nang golf course.

According to the announcement of Mr. Nguyen Muoi, Chairman of Danang Bach Khoa Golf Club, N.V.D. and three guests played golf at BRG Da Nang golf course on December 6. During the game, due to a disagreement with a female caddie over the number of strokes played in a hole, N.V.D. used a driver golf club to hit the caddie until the golf club was broken, causing her to lose consciousness and must be brought to the emergency room at Da Nang General Hospital. After that, D. forbade the golf course from announcing the incident outside; at the same time, he let his associates enter the golf course to threaten security guards, employees, and caddies not to reveal information.