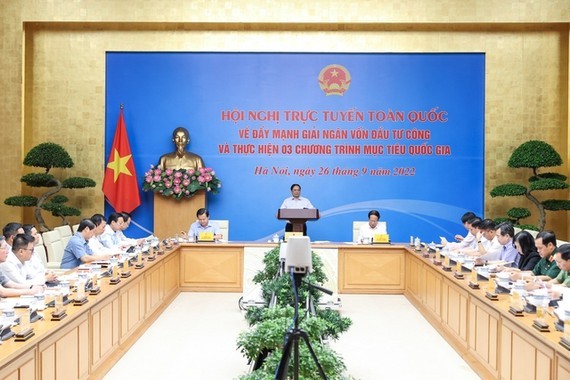 The conference, which is taking place in in-person form in Hanoi with online connection with 63 centrally-run cities and provinces, discusses the acceleration of such disbursement and the implementation of three national target programs.

PM Chinh noted that public investment disbursement is a key task but it has been a weak point of the system from the beginning of the year.

Slow progress of the work has been recorded in many years, he said, requesting that the causes behind the slowness must be clarified.

The Government leader said he hopes to hear participants’ frank comments on the situation and proposals on related solutions to the issue.

A total of VND285.4 trillion (US$12.18 billion) sourced from the State budget was disbursed in the first eight months of 2022, equal to 51 percent of the yearly plan and up 16.9 percent year-on-year, according to the General Statistics Office (GSO).