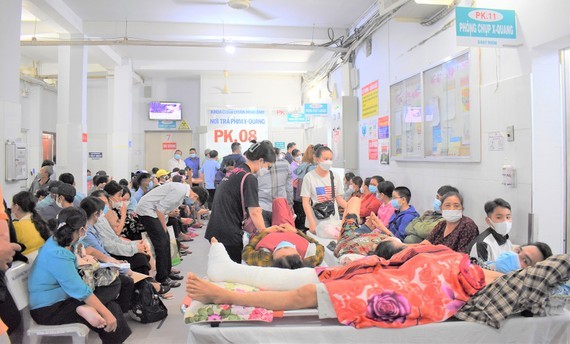 It took nearly 10 minutes to encourage her son, 72-year-old Nguyen Thi Hanh in Binh Thanh District to take a middle-aged man with a scowling face to see doctors. As soon as he sat down in the chair, the son took the mask off his face and shouted to return home.

Ms. Hanh moaned that her child has lately become seriously ill, sometimes he got angry, then breaks things in the house. So, the old woman wondered whether her son can stay in the hospital for treatment. However, not long after following the medical staff to the inpatient department, Ms. Hanh returned to the doctor saying that the hospital room each is small and damp, and she feared that the condition of her son would be more serious.

The Psychiatric Hospital currently has three facilities with a total size of 300 beds, but the facilities are severely degraded. Ceramic tiles on floors in the hospital campus, the lobby and the examination rooms are peeling, the rusty door frames are closed, and the walls are stained, mossy red and green.

Especially, the rooms for inpatients and the administrative area at Le Minh Xuan boarding facility in Binh Chanh District has been seriously degraded after 38 years of use including the degradation of concrete structures. Plaster is peeling off brick walls exposing iron reinforcement, and many walls and columns appear cracks, absorbing water every time it rains heavily. Patients and relatives are afraid of going to degraded facilities for examination and treatment.

Elsewhere in the southern largest city, the Hospital for Tropical Diseases is 160 years old; it was recorded to be the oldest facility in Vietnam and awarded a certificate by the Vietnam Record Organization. Every day, this infirmary receives 2,000-3,000 patients. Due to the narrow space, with each clinic of the hospital only less than 10 square meters, doctors and nurses work in a crowded environment while receiving examinations and treatment of many infectious diseases. In spite of that, the project to build a new medical examination department has been delayed for 15 years due to bottlenecks relating to road and park planning.

According to the document, on August 15, 2007, the People's Committee of District 5 issued a Decision 12/2007, which included the land planning of the Hospital for Tropical Diseases in Ho Chi Minh City including the Hospital of Trauma and Orthopedics and the Psychiatric Hospital.

After many years, the municipal People's Committee approved the Hospital for Tropical Diseases in Ho Chi Minh City to implement the project of building a new medical examination department in 2011. By 2016, the project was approved by the municipal People's Council the construction of the infirmary is taken state budget. However, the Department of Transport insisted that the projected Cao Dat road in the section from Le Hong Phong Street to Huynh Man Dat Street must keep the approved 1/2000 scale zoning plan, in order to ensure traffic flow in the street. As for the adjustment of the planning without opening this projected route, it is recommended that District 5 must have a report of adjustment of the planning attached with reason and the legal basis.

Last April 2022, the Department of Transport continued to ask the People's Committee of District 5 for comments on adjusting the planning without opening the projected Cao Dat route. Until July 2022, the People's Committee of District 5 has just issued Official Letter No. 876/UBND-QLDT dated July 13, 2022, to the Department of Planning and Engineering on the projected Cao Dat route.

The City Hospital for Trauma and Orthopedics was built in 1968 in an area of more than 5,000 square meters with an initial scale of 100 inpatient beds, now it has been expanded to 600 beds. The hospital in poor repair only has a single road nearly 2 meters wide while it every day receives about 5,000 patients who come to the hospital for examination and treatment.

Every time, patients on stretchers are brought to the hospital, people in a line have to stand, even stepping on each other's feet. Along the corridors of the hospital's departments, many places of water continuously leaked from the ceiling, and patients were lying in long lines. Beds are placed close together; hence, patients’ family members sit and lie, even under the hospital bed.

A doctor of the Spine Department A shared that medical workers are working in uneasy environments. With an area of only nearly 3 square meters for each bed, everyone must try to innovate the service style and improve the treatment technique. Not only patients but the medical team also suffered.

To solve the problem of patient overcrowding, the project of building a new Ho Chi Minh City Orthopedic Hospital in the project cluster of new construction projects of Ho Chi Minh City Hospital for Trauma and Orthopedics and High-Tech Eye Hospital in area 6A in Binh Chanh outlying district’s Binh Hung Commune with a total area of more than 52,000 square meters was approved by the Prime Minister in 2010 in the form of build- and transfer.

After 10 years of planning, compensation and clearance, the project construction has not been started yet because only 30,440.7 square meters have been recovered equivalent to 74.23 percent of the total area whereas 62 households have not yet agreed on clearance compensation.

Faced with this fact, the Department of Health has proposed to the municipal People's Committee to stop the project at area 6A but move it to the location of Lot III-27 in Tan Tao – Dem Market in Tan Tuc town according to the proposal of the hospital. It is still unknown when the new Orthopedic Trauma Hospital project will officially start, and the patients are tired of waiting!