Expressing his delight at the two nations’ strategic partnership being consolidated across fields, particularly trade, investment and political trust, he noted RoK firms are taking the lead in terms of FDI volume in Vietnam with a total capital of $80 billion.

The State leader thanked Lotte for helping Vietnam in pandemic prevention and control, notably an aid worth VND3.7 billion ($157,766), discount programs for necessities, and the provision of face-mask and gifts for workers.

For his part, Shin thanked the Vietnamese Government, ministries, sectors and localities for their support for his group over the past time.

He informed his host on a number of Lotte’s projects earmarked for Hanoi, including a shopping center expected to attract some 10 million visitors annually.

Lotte also wants to promote the building of a startup ecosystem in support of Vietnamese youth and invest in Vietnamese start-ups, Shin affirmed. 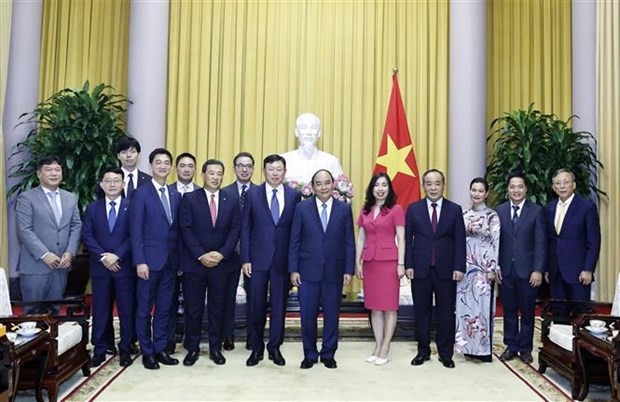 The host, guest, and other participants of the reception  pose for a group photo (Source: VNA)
According to him, since 1996, the group has invested in Vietnam across many fields, with its capital totaling VND40 trillion and current number of employees exceeding 20,000. Agreeing with the group’s investment orientations, particularly those involving start-up development and job creation, President Phuc hoped Lotte will contribute to enhancing the nations’ economic cooperation toward $100 billion in bilateral trade revenue. Lotte's projects have helped to meet the growing needs of Vietnamese people given a rapidly expansion of the local middle class and of 200,000 Koreans living and working in Vietnam, he said. He went on stressing that the two countries’ businesses play an important role in lifting the Vietnam – RoK relations to new heights this year in celebration of the 30th anniversary of their diplomatic relations.
VNA