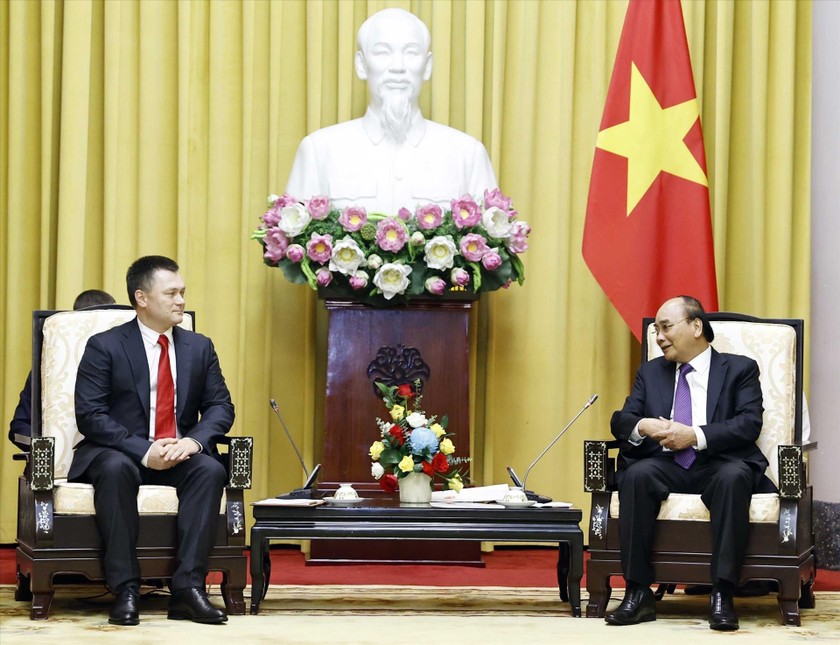 During the meeting, the President affirmed that Vietnam always treasures and remembers the great help of the former Soviet Union and Russia today, and always strives to boost its comprehensive strategic partnership with Russia.

He recalled the success of his official visit to Russia late last year, with special milestones in the bilateral relations, and stressed that Vietnam and Russia have high political trust and bilateral cooperation has developed fruitfully across fields.

He spoke highly of cooperation results between the two countries’ procuracies over the past time, especially the upcoming signing of a three-year cooperation program from 2023 to 2025 between the Supreme People's Procuracy of Vietnam and the Prosecutor General's Office of Russia.

The President suggested the two sides continue promoting cooperation and exchange of delegations at all levels in order to strengthen friendship and mutual understanding, and share information on crime, thus improving the efficiency of their coordination in the fight against crime, especially cybercrime.

President Phuc said the two sides need to strengthen cooperation in personnel training, and promote collaboration in new forms, contributing to further boosting the friendship and comprehensive strategic partnership between the two nations.

Krasnov, for his part, said the joint statement on the vision of Vietnam - Russia comprehensive strategic partnership by 2030 after the official visit by President Phuc to Russia in 2021 has opened important cooperation opportunities between ministries, sectors and localities of the two countries.

According to Krasnov, the Supreme People's Procuracy of Vietnam and the Prosecutor General's Office of Russia will sign a three-year cooperation program from 2023 to 2025, opening up a new phase of cooperation in the fields of information technology, experience sharing in environmental protection, international cooperation on asset recovery, combating crimes related to human trafficking, tax, finance and cryptocurrency transaction.

The Prosecutor's Office of Russia will help train officials and prosecutors for Vietnam, he said, adding that the two sides will regularly exchange experts and researchers to study at educational institutions in the two nations.

The Russian guest expressed his belief that in the spirit of regular cooperation, the two sides will make many achievements in preventing and combating crimes, thus contributing to ensuring national security, social order and safety of each country, and fostering traditional friendship between Vietnam and Russia.