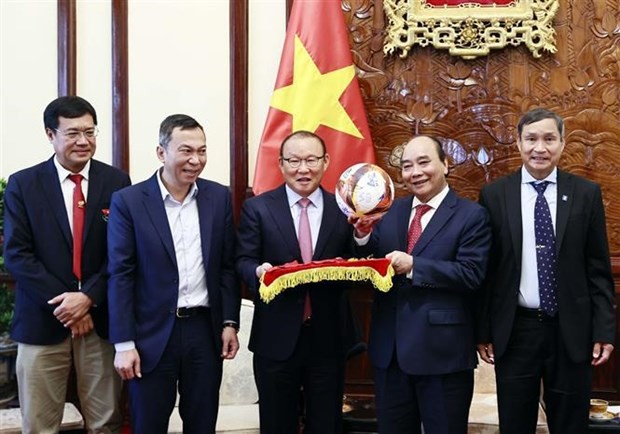 The President congratulated coaches Park Hang-seo of the men’s football team, Mai Duc Chung of the women’s, and other coaches and athletes of Vietnam on their achievements at the biggest regional sports event, which took place in Hanoi and 11 nearby localities from May 12-23.

Vietnam ranked first in the medal standings with 205 gold, 125 silver and 116 bronze medals. As many as 305 outstanding athletes have been honored with the Prime Minister's certificates of merit for their excellent performances at the event.

The President also commended the Ministry of Culture, Sports and Tourism, the Vietnam Sports Administration, and localities for their active role in the organization of the Games.

Phuc expressed his admiration for the female footballers who have claimed the SEA Games championship title for seven times, and earned a berth at the FIFA Women’s World Cup for the first time.

Meanwhile, U23 Vietnam have brought home golds at two consecutive editions of SEA Games, helping to affirm Vietnamese football’s position in Southeast Asia, he said, stressing that the success by the two squads marks a milestone of the domestic football and contributes to raising Vietnam’s image.

The President called on the coaches and athletes to make greater efforts in the upcoming tournaments, helping Vietnam shine in the international arena.

For his part, Park suggested the Vietnamese Party and State pay more attention to football, improving skills of players and giving more encouragement to them.

Chung pledged to exert greater efforts in his work, and proposed the Party and the State pay more heed to job generation for female players after their retirement.

In this regard, Phuc noted that policies are needed to develop new, young athletes and coaches, and urged localities to further invest in sport infrastructure and promote professional sporting.

He also asked agencies to provide timely rewards to outstanding athletes and coaches at the Games.