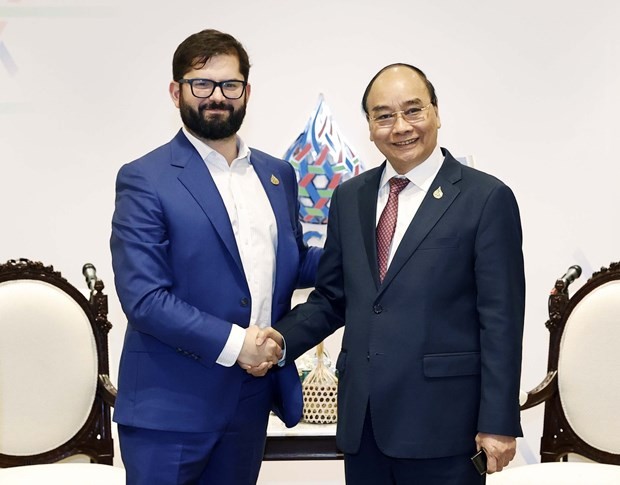 At their meeting, President Phuc and his Philippine counterpart Ferdinand Romualdez Marcos agreed to push ahead with efforts to deepening the two countries’ strategic partnership.

President Marcos affirmed that the Philippines always respects the strategic partnership with Vietnam, and appreciated Vietnam’s support for the Philippines to ensure food security.

The two leaders affirmed their resolve to continue coordinating closely to promote solidarity and maintain ASEAN’s centrality in common security issues, including the East Sea, and contribute to efforts to build an environment of peace, security and development in the region and the world.

Talking to Singaporean Prime Minister Lee Hsien Loong, President Phuc suggested the two sides study the establishment of partnership in digital economy and green economy as a highlight in their cooperation in the time ahead.

He invited the Singaporean PM to visit Vietnam to discuss measures to deepening the strategic partnership between the two countries.

PM Lee Hsien Loong agreed with President Phuc’s suggestions, noting that Vietnam is an important partner of Singapore in the region.

During the meeting with PM Han Duck-soo of the Republic of Korea, President Phuc appreciated the strong strides in bilateral cooperation, and proposed that the two sides support and facilitate the role of the Vietnamese community in the RoK and the RoK community in Vietnam in order to enhance bilateral ties.
The two leaders affirmed the importance that the two countries attach to their strategic partnership, with Vietnam considering the RoK one of the most important partners and the RoK continuing to consider Vietnam its key partner in the region.

PM Han vowed to continue to cooperate closely with Vietnam in international and regional issues of common concern and coordinate with Vietnam to enable the country to fulfil its role as coordinator of ASEAN-RoK ties in 2022-2024.

Meeting with Chilean President Gabriel Boric Font, President Phuc affirmed that Vietnam is determined to promote ties with Chile. He invited the Chilean President to visit Vietnam, and proposed that the two countries work together to enhance cooperation between ASEAN and the Pacific Alliance (PA) as well as at other multilateral forums.

President Gabriel Boric Font put forward some proposals aimed at promoting bilateral economic-trade cooperation in the framework of the bilateral free trade agreement as well as the CPTPP.

The Australian PM congratulated Vietnam over its election to the UN Human Rights Council in the 2023-2025 tenure, saying that he believes Vietnam will continue to make substantive and effective contribution to the mechanism with its experience from the previous tenure in the council.

He affirmed that Australia attaches importance to strengthening the strategic partnership with Vietnam, and will coordinate with Vietnam to celebrate the 50th anniversary of bilateral diplomatic ties in 2023.

In another meeting, President Phuc and his French counterpart Emmanuel Macron shared the wish to further deepening the Vietnam-France relations.

For his part, the French President reiterated that he respects Vietnam’s role and position in Southeast Asia and ASEAN. He wished that the two countries will promote cooperation across all fields in 2023 when they will mark the 50th anniversary of diplomatic ties and 10th year of the bilateral strategic partnership, particularly in green energy, agriculture and defense.

The Vietnamese President also met with his Canadian counterpart Justin Trudeau, with both of them expressing satisfaction at the strong development of the Vietnam-Canada strategic partnership. The two sides agreed to increase all-level visits towards the 50th anniversary of diplomatic relations in 2023.

They also reached consensus on enhancing cooperation in climate change, gender equality, and handling of global challenges such as food security, energy security and cyber security.

Talking to Vice President of Peru Dina Ercilia Boluarte Zegarra, President Phuc welcomed the Peruvian parliament’s ratification of CPTPP, saying that it creates a favorable legal framework for raising bilateral trade in the years to come.

The Peruvian Vice President invited Phuc to visit Peru and attend the APEC Economic Leaders’ Meeting in 2024. She said Peru values the effectiveness of investment cooperation between Vietnam and Peru, and hopes both countries can optimize such mechanisms as APEC, CPTPP, ASEAN and the Pacific Alliance to lift their relations to a new height.