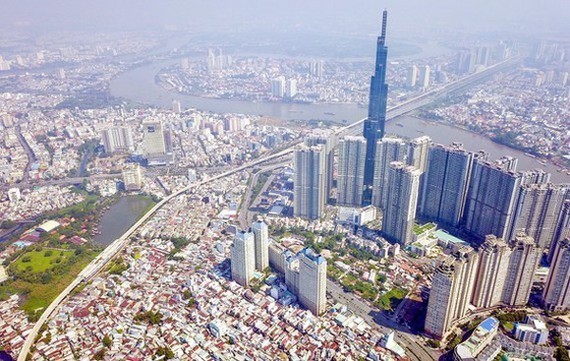 HCMC seen from above

The Politburo highly appreciated the effort of the Party, Government and people of HCMC in overcoming difficulties and challenges, and acknowledged the city’s important achievements in socio-economic development, national defense and security during the ten-year implementation of resolution No.16.

The city’s economic scale and GRDP in 2020 increased by 2.7 times and twofold compared to 2010, respectively. It has continuously innovated its growth model, improved the development quality on the basis of science and technology application, transformed economic restructure that focus on the industries, services and high-tech agriculture, and collected the annual State budget that exceeds the estimate. The sectors of science and technology, education and training, health, culture, and sports reached good results.

The politburo came to an agreement on issuing the direction and task of developing HCMC until 2030 and turning it into a city of modern services and industries, digital society and economy; an economic, financial, trade, science, technology and cultural center of southeast Asia with deep and extensive international integration; and an Asia's economic, financial and service center, an attractive global destination with distinctive economic and cultural development, high quality of life, and a developed city on a par with leading cities in the world by 2045.

The Political Bureau also pointed out restraints, such as a slow rate of economic growth, low international competitiveness, improvement of investment environment, ineffective regional linkage, declined economic growth driving force, per capita income that did not meet targets, unsatisfactory performance in building and improving the Party and political system.

The Politburo asked the southern economic hub to strictly coordinate with State agencies, ministries and localities to implement the resolution effectively, quickly develop the economy and strengthen productivity, quality, efficiency, international competitiveness and regional development linkage as well as enhance the construction of infrastructure and the quality of planning tasks.

In addition, HCMC needs to pay attention to sustainable urban development, and climate change adaptation, and focus on effectively mobilizing and using resources, deploying potentials and advantages for fast and sustainable development, developing culture, society, education and training, caring for the people’s health and strengthening the quality of residents’ life.

Members of the Politburo also stressed that the city must ensure national defense and security, improve the effectiveness of foreign affairs and international cooperation, enhance the building of the Party, a pure and strong political system, complete mechanisms, policies and laws for the city’s development in the new period.