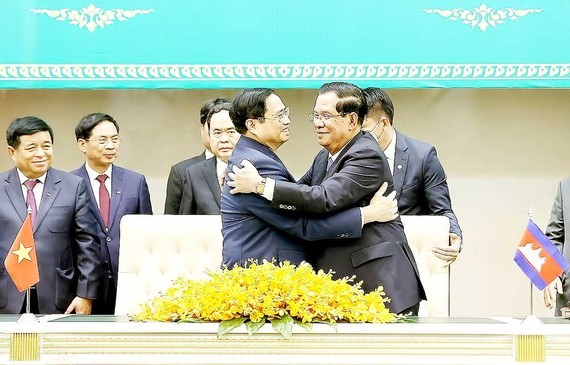 PM Pham Minh Chinh and his Cambodian counterpart Samdech Techo Hun Sen at the signing ceremony of documents between the two countries in Phnom Penh on November 8 (Photo: VNA)

At their talks held in Phnom Penh, PM Chinh, now on an official visit to Cambodia, highly valued the contributions and encouraging outcomes by Cambodia as the Chair of ASEAN in 2022, saying he believes the country will successfully organize the 40th and 41st ASEAN Summits and related summits in the next few days.

Welcoming his guest, PM Hun Sen said the visit holds great significance in 2022 as the countries are celebrating the 55th anniversary of their diplomatic ties.

Both sides expressed their delight at the development of bilateral relations and noted that despite pandemic-caused difficulties, political and diplomatic ties have still been reinforced unceasingly through frequent high-level meetings and bilateral cooperation mechanisms.

They affirmed their determination to advance the Vietnam - Cambodia relations in an increasingly substantive and effective manner, considering this as an objective and inevitable requirement for both countries.

Agreeing to keep enhancing defense and security ties, the two leaders stressed the principle of not allowing any hostile forces to use the territory of a country to harm the security and interests of the other. They also emphasized their coordination to effectively carry out existing agreements and mechanisms to sustain political stability, security, and social order and safety in each country; prevent cross-border crimes like human and drug trafficking; and guarantee cyber security and protect citizens. 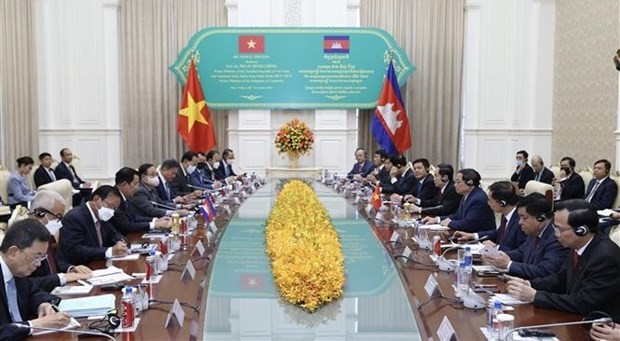 The talks between Vietnamese PM Pham Minh Chinh and his Cambodian counterpart Samdech Techo Hun Sen in Phnom Penh on November 8 (Photo: VNA)
PM Chinh thanked Cambodian authorities for working closely with Vietnam to successfully rescue many Vietnamese citizens lured to Cambodia for illegal work. He asked the two sides to maintain close coordination to thoroughly deal with this issue. The two leaders concurred in the continuation of joint efforts to search for and repatriate remains of Vietnam’s volunteer soldiers and experts who laid down in Cambodia, and to step up the repatriation of remains of soldiers of the Kampuchean United Front for National Salvation from Vietnam. Regarding economic partnerships, the PMs noted with satisfaction that trade and investment have become a bright spot in bilateral ties. Trade between the countries topped US$9.5 billion in 2021 and reached $8.45 billion in the first nine months of this year, respectively rising nearly 80 percent and 16.7 percent year on year. Bilateral trade is relatively balanced. Meanwhile, Vietnam has 198 valid investment projects worth $2.92 billion in Cambodia at present, ranking first among the ASEAN investors and fifth among all foreign investors here. 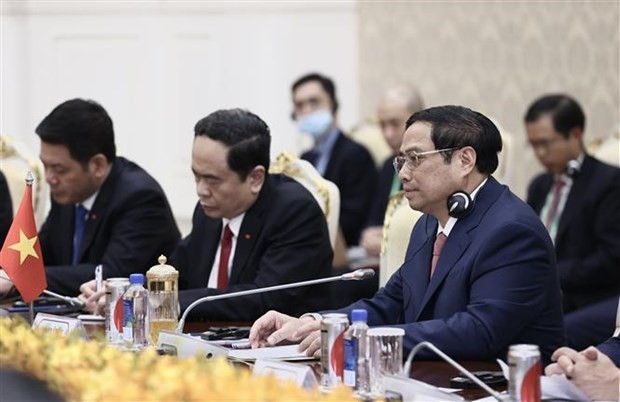 PM Pham Minh Chinh (R) at the talks with his Cambodian counterpart Samdech Techo Hun Sen in Phnom Penh on November 8 (Photo: VNA)
They agreed to boost connecting the two economies in terms of infrastructure as well as regulations and policies, while assisting each other to build an independent and self-reliant economy in each country and to ensure extensive, intensive, and effective integration into the world. The PMs also underlined the importance of cross-border trade and cooperation in economic development in border areas and border gate zones. They applauded both sides’ efforts to finalize the Vietnam - Cambodia border trade agreement to be signed during the visit. PM Chinh asked the Cambodian Government to create more favorable conditions for Vietnamese enterprises to carry out stable and long-term investment and business operation in Cambodia on the mutually beneficial basis. In terms of border affairs, they agreed to respect and fully implement the border-related agreements signed between the two countries, continue to step up negotiations, make joint efforts to seek proper solutions to the remaining 16 percent of land border on which demarcation and marker planting haven’t finished, and resolve issues emerging in the spirit of solidarity and friendship, thereby helping build a Vietnam - Cambodia border of peace, stability, and cooperation. The two were unanimous in continuing to promote partnerships in education - training, transport, agriculture - forestry - fisheries, information and communications, finance - banking, culture, tourism, people-to-people exchange, and sports.

The two PMs witness the signing of documents between the two countries after their talks on November 8. (Photo: VNA)
PM Hun Sen thanked Vietnam for its continuation of scholarships granted for Cambodian students and also spoke highly of the fast growing numbers of Vietnamese and Cambodian tourists to each other’s countries since border reopening. PM Chinh affirmed Vietnam’s readiness to further share experience with and assist Cambodia to successfully organize the 32nd Southeast Asian Games (SEA Games) in 2023. He also appreciated and called for Cambodia’s continued attention to and favorable conditions for the Vietnamese-origin community to live and work stably and legally in the country, integrate into the local society, and actively contribute to local socio-economic development. At the talks, the two Government leaders also discussed some regional and international issues of shared concern. They stressed that amid the complex and unpredictable global and regional situation, Vietnam and Cambodia should enhance coordination and mutual support at multilateral forums, especially within the framework of ASEAN and the Mekong sub-regional cooperation mechanisms; actively help cement ASEAN’s solidarity and unanimity and promote the bloc’s centrality; and together actively contribute to peace, stability, cooperation, and development in the region and the world. They emphasized the importance of ensuring security, safety, and freedom of navigation and overflight; increasing trust building; not threatening to use or using force; complying with international law; resolving disputes by peaceful means on the basis of international law, including the 1982 United Nations Convention on the Law of the Sea (UNCLOS); and supporting the parties concerned to seriously and fully implement the Declaration on the Conduct of Parties in the East Sea (DOC) and promote the finalization of an effective and substantive code of conduct (COC) in the East Sea that matches international law, including the 1982 UNCLOS. On this occasion, PM Chinh invited his counterpart to pay an official visit to Vietnam at an early date, and PM Hun Sen accepted the invitation with pleasure. Following the talks, the two leaders witnessed the signing of 11 documents between the two countries.
VNA