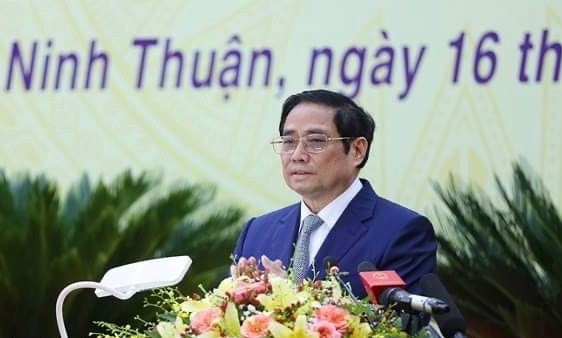 The Government leader hailed the efforts of the Party organisation, administration and residents of Ninh Thuan to optimise the locality’s advantages to develop renewable energy, maritime economy and tourism. He also lauded the province’s achievements in controlling Covid-19 and maintaining high economic growth at 9 percent in 2021, ranking fourth among 63 localities nationwide and first in the north central and central coastal region.

The PM underlined that however, there remains great work for Ninh Thuan to realise its goal of becoming a rich province, especially in completing the infrastructure system, reforming economic structure, improving human resources quality, attracting investment, and strengthening science-technology application in agriculture, services and tourism.

He suggested that Ninh Thuan should promote the solidarity and consensus among the Party organisation, administration and residents to effectively implement the resolutions of the 13th National Party Congress and the 14th provincial Party Congress as well as relevant plans and strategies.

The province should reshuffle its administrative system to improve working efficiency, he said, asking the province to strongly improve its investment environment and actively remove difficulties facing businesses and local residents, while encouraging startups.

PM Chinh also directed Ninh Thuan to diversify social resources and restructure its economy in line with the reform of growth model, while giving greater attention to infrastructure building and calling for investment in the form of public-private partnership.

He reminded Ninh Thuan to maintain a balance between economic development and the protection of the ecological environment, while ensuring social welfare and improving its capacity in climate change response.

He asked ministries, sectors and agencies to assist Ninh Thuan in becoming an attractive destination of Vietnam in the future.

At the ceremony, the PM presented the first-class Labour Order of the Party and State to the Party organisation, administration and people of Ninh Thuan in recognition of their outstanding contribution to renewable energy development.

Secretary of the provincial Party Committee Nguyen Duc Thanh highlighted the strong growth of Ninh Thuan over the past 30 years with comprehensive achievements.

Last year, the province's gross regional domestic product (GDP) expanded by 69.6 times compared to 1992, with average growth rate of 8.14 percent per year, higher than the country’s average. Total social investment also increased by more than 440 times in the period.

The provincial leader said that Ninh Thuan is striving to become a renewable energy hub in 2025 and a locality with upper middle-income of the country in 2030.