He made the request during a working session with provincial officials on March 20, while highlighting the province’s advantage in seaports, which the PM said could contribute to the development of the country and the southeastern region.

Hailing the province for its achievements in socio-economy, national defence-security and Party building work, he noted that local seaports’ growth of about 2 percent amid the pandemic is good news.

The PM mentioned the Party’s guidelines and the 13th National Party Congress’s Resolution on the upgrade of seaports nationwide, including building logistics and transportation infrastructure in the region and improving service quality. He said as Cai Mep – Thi Vai Port together with Lach Huyen Port in Hai Phong city are among the top deep-water seaports in the world, they create an advantage for the country in development.

At the same time, PM Phuc pointed out problems of the region, including incomplete transport infrastructure and a lack of modern logistics facilities, financial and banking system, and a strong fleet of ships, which must be addressed promptly.

He told relevant ministries and agencies to improve infrastructure at Cai Mep – Thi Vai Port, early start the construction of the Bien Hoa – Vung Tau expressway and Phuoc An bridge to facilitate the transportation of goods for import and export.

The leader also suggested building plans to form financial-banking-insurance hubs in Phu My town, Vung Tau city, while developing industrial and processing zones to shape a for-export processing centre in the province. He agreed with a proposal to open a free trade area at Cai Mep area to attract more foreign investors and a project on connecting Con Dao island district with the national grid.

The Cai Mep – Thi Vai port complex is a group of deep-water seaports with a combined length of over 20km, which account for over 30 percent of the country’s exports by containers, which are expected to be a trade gateway in the south.

Gemalink is the biggest seaport in the Cai Mep-Thi Vai complex and one of the 19 big seaports in the world which is capable of receiving the world’s biggest cruise liners. Built at a total investment of US$520 million in two phases, the port is equipped with ship-to-shore cranes designed and manufactured in Vietnam. When the first phase of the port is inaugurated in May, it will run at at least 80 percent of its designed capacity this year and at full capacity from next year.

During the trip, the PM also visited Tan Cang – Cai Mep International Terminal – a joint-venture between Saigon New Port Corporation and three foreign partners with a total investment of US$100 million. Operational in January 2011, the terminal is capable of serving super vessels up to 160,000 DWT.

Over the past years, Ba Ria – Vung Tau has always been one of the five biggest contributors to the State budget. It is home to 69 seaports. 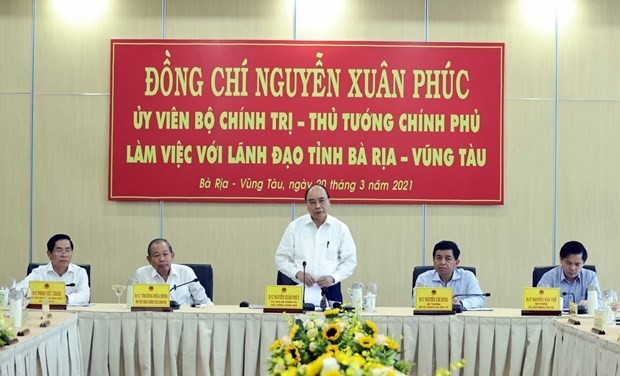