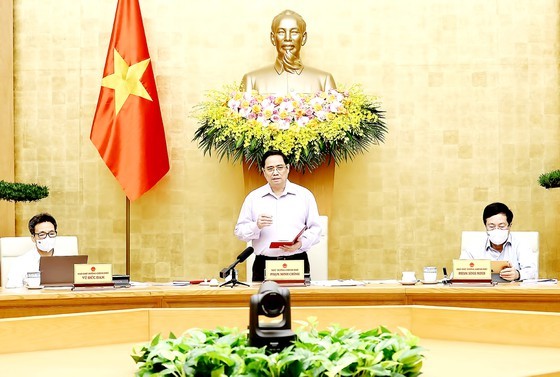 The Government leader made the request while chairing the Cabinet’s teleconference with localities nationwide to assess the country’s socio-economic situation in the first half of the year as well as set directions, tasks and solutions for the second half.

“Localities must not exchange justice, social progress, culture and the environment for mere economic growth; and take the protection of people's health and lives first and foremost,” he stressed.

Those being hit by the pandemic must give priority to pandemic prevention and control to early stabilise the situation, while continuing to effectively implement the vaccine strategy, he said.

Regarding the socio-economic development results in the first six months, Prime Minister Chinh affirmed that Vietnam has been well implementing the dual goals, with gross domestic product (GDP) increasing by 5.64 percent, much higher than the same period in 2020 (1.82 percent), and budget revenue reaching nearly 58 percent of the estimate.

Meanwhile, social security, security and order were ensured, and external relations were enhanced, he added.

However, according to the PM, there were still some limitations such as economic growth yet to reach the set target, unsustainable macro economy, and slow disbursement of public investment and ODA capital.

The Covid-19 pandemic is still complicated in several localities, while production and business activities and people's lives in some places are facing difficulties, he noted.

Therefore, in the time to come, localities should make greater efforts to fulfill their set targets, the leader said, adding that the Government is yet to adjust the growth targets set at the 13th National Party Congress and assigned by the National Assembly and will continue with two scenarios of 6 percent and 6.5 percent.