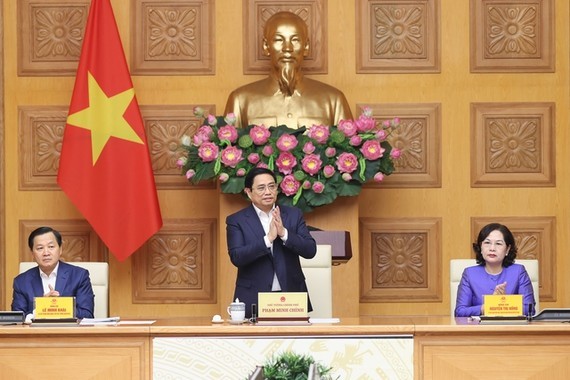 Prime Minister Pham Minh Chinh (center) speaks at the meeting with chairpersons and CEOs of commercial banks in Hanoi on October 16. (Photo: SGGP)

The event took place on the occasion of 77 years since late President Ho Chi Minh sent a letter to the industry and trade sector and the 18th Vietnam Entrepreneurs Day (October 13).

Nguyen Thi Hong, Governor of the State Bank of Vietnam (SBV), reported that in the first nine months of 2022, the SBV has steered the monetary policy in a proactive and flexible manner while closely coordinating it with the fiscal and other macro policies to help with the economy's recovery. It has also stayed vigilant to inflationary risks to help maintain macro-economic stability.

The SBV has submitted to the Government for approval and implement a policy on 2 percent interest rate support for businesses through commercial banks. Cashless payment has been rising strongly while the restructuring of credit institutions in tandem with the settlement of non-performing loans has been promoted, inspection and supervision conducted frequently and strictly, she noted.

The PM applauded efforts by the entire banking sector, saying that the sector has made important contributions to the country’s achievements. He said the sector has concurrently fulfilled two tasks – helping curb inflation and stabilize the macro-economy, and providing credit for the economy.

He cited statistics as showing that as of the end of September, total credit supplies had reached VND11.55 quadrillion (US$478.5 billion), up 10.8 percent from the end of 2021. Commercial banks have been growing unceasingly in terms of size, quality, and financial capacity. Total asset of joint stock banks now amounts to about VND7.5 quadrillion, including over VND7 quadrillion of the four state commercial banks.

In particular, commercial banks have also exercised their social responsibility by actively engaging in poverty reduction, natural disaster response, and donation of medical supplies and money to the Covid-19 vaccine fund.

At the meeting, the Government leader also pointed out certain shortcomings, difficulties, and challenges facing the banking sector, including fast and complex changes in the global situation, soaring inflation and interest rates in the world, and the sharp depreciation of many currencies. Meanwhile, the Vietnamese economy is still small and has big openness but limited resilience; people and enterprises have been hit hard by the Covid-19 pandemic; the stock, corporate bond, and real estate markets have revealed some problems; and the financial strength, quality, management capacity, and technology of commercial banks remain modest. 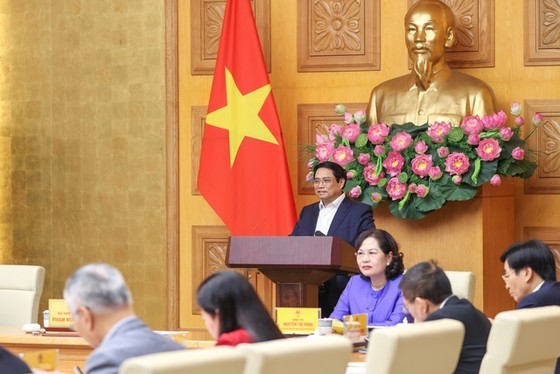 Prime Minister Pham Minh Chinh speaks at the meeting with chairpersons and CEOs of commercial banks in Hanoi on October 16. (Photo: SGGP)
PM Chinh instructed the SBV to maintain a strict, prudent but proactive, flexible and effective monetary policy while harmoniously combining it with the fiscal policy and others to keep inflation under control, stabilize the macro-economy, boost growth, and guarantee major balances of the economy. He also told the central bank to effectively carry out the plan on credit institution restructuring and bad debt settlement; step up the handling of poor-performing commercial banks; overhaul and align the legal framework on monetary, credit, and banking issues with international practices and the Vietnamese situation; increase inspection and supervision; improve personnel’s capacity; ensure the system’s safety; and press on with digital transformation in the sector. For commercial banks, he requested them to enhance their governance, management, and financial capacity; improve service and credit quality and efficiency; ensure transparency; modernize operations and better competitiveness; develop digital banking and cashless payment; expand their networks; improve the efficiency of credit distribution; boost non-credit services and green credit; and continue performing social responsibility. The PM also demanded ministries and sectors work closely with the SBV to deal with relevant issues, especially opinions and proposals from commercial banks, so that the sector can develop strongly and sustainably to further contribute to national development.
VNA